How A US Airforce Fighter Landed Itself After The Pilot Ejected 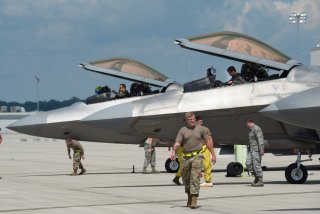 The story of the “Cornfield Bomber,” an aircraft that landed without a pilot, might not sound very impressive in today’s age of drones and increased automation. The narrative changes drastically when one key piece of information is added: this happened in 1970, after the pilot was forced to eject from a jet he had last control of.

The bizarre event, on February 2nd, 1970, to be precise, took place during a training sortie for the 71st Fighter Interceptor Squadron out of Malmstrom Air Force Base in Montana. Three pilots in F-106 Delta Darts took to the sky for a two-on-one combat training exercise. A fourth was a last-minute scratch from the flight schedule after an equipment issue on the runway, leaving instructor pilot Captain Tom Curtis flying solo against fellow instructor pilot, Major James Lowe, and 1st Lieutenant Gary Foust (at the sticks of the “Cornfield Bomber”). Regardless of the hierarchy, bragging rights were at stake.

“Of course, this was a big ego thing, who was the winner…” said Curtis, whose recollection of the day is available at f-106deltadart.com.

Curtis goes on to detail what led to Foust needing to eject from his aircraft:

“I figured I could handle Gary pretty easy, but I did not trust Jimmy. I figured he would probably break off and come after me. With this thought in mind, I came at them in full afterburner. I was doing 1.9 Mach when we passed.

I took them straight up at about 38,000 feet. We got into a vertical rolling scissors. I gave [Gary] a high-G rudder reversal. He tried to stay with me – that’s when he lost it. He got into a post-stall gyration… a very violent maneuver. His recovery attempt was unsuccessful and the aircraft stalled and went into a flat spin, which is usually unrecoverable.”

Lt. Foust started running through emergency recovery procedures by the book, but the jet did not respond and continued to spin and plummet to the Earth. Maj. Lowe instructed him to deploy his drag chute, but it only wrapped uselessly around the tail. Out of options, Foust was finally instructed to eject at 15,000 feet. No one could have predicted what happened next.

Wh en Foust ejected, the Delta Dart first went nose down, but then recovered on its own and resumed the straight and level flight Foust had been trying to achieve for about 23,000 feet. Lowe watched Foust eject, and then witnessed the unmanned F-106 take things from there, improbably flying itself away. Unphased, Lowe still had time for humor, and quipped over the radio:

Of course, Foust had little choice but to watch, dumbfounded, as he floated safely to the ground in the mountains of Montana, to be later extracted by locals on snowmobiles.

“I had assumed it crashed,” he said years later in an interview at the National Museum of the U.S. Air Force (where the jet now sits). However, over fifty miles away as the crow (or Delta Dart) flies, the jet skidded on its belly to a safe landing in a field near a town called Big Sandy.

The high-performance interceptor hadn’t gone unnoticed on its approach through rural Montana. According to a 1978 article in the Mohawk Flyer (a local paper near Griffiss AFB in NY, where this particular jet had since been re-assigned), a local sheriff got in touch with the Air Force at Malmstrom and got instructions on how to throttle down the still-turning aircraft. The jet was melting the snow beneath it and still lurching slowly across the field. The understandably apprehensive sheriff decided to instead let the jet punch itself out and run out of fuel, which took another hour and 45 minutes.

Fortunately, bystanders had kept a safe distance from the unpredictable monstrosity that managed to crawl another 400 yards. The radar in its nosecone was still sweeping and would have been hazardous to anyone approaching the aircraft from the front, as well. When the dust (or snow) had settled, Foust’s wayward steed was no worse for the wear besides a gash in the belly. It was partially disassembled and transported by train to California, where it was repaired and eventually returned to service.

With the rise of the F-15, and as the Soviets began to focus more on inter-continental ballistic missiles over long-range bombers for nuclear deterrence, the F-106 was slowly phased out. Ironically, many were converted to the QF-106, an unmanned drone used for target practice. This bird, however, was not one of them. Tail number 58-0787 ended up as one of the jets at the 49th Fighter Interceptor Squadron, the Air Force’s last F-106 squadron, at Griffis AFB. As fate would have it, Foust would be stationed there, along with his wingman the day of the incident, James Lowe, who was now his squadron commander. Lowe, who apparently has a delightfully twisted sense of humor, saw to it that Foust was paired back up with his old aircraft.

How did the “Cornfield Bomber” land itself?

An unmanned jet flying itself to a safe landing, away from a populated area, and almost completely unharmed, is improbable, to be sure. It was more than just dumb luck, however. As theorized by Peter Grier in his Air Force Magazine article, the force of the rockets from Foust’s ejection seat, as well as the shift in the aircraft’s center of gravity from a now missing pilot, corrected the spin and set the aircraft back to what it was naturally shaped to do, take advantage of lift and fly.

As it turns out, the attempted recovery procedures carried out by Foust before he bailed out were significant in saving the aircraft. One of those measures was to “trim” the aircraft to take-off settings, which happen to be very similar to those for landing. Trim refers to automated settings that free the pilot from having to maintain constant pressure on the controls to keep flight surfaces (flaps, ailerons, etc.) in the correct position for a given phase of flight (ascent, descent, maintain altitude, etc.)

“When Gary ejected, the aircraft was trimmed wings-level for about 175 knots (200 mph), a very nice glide setting,” Curtis said in his account.

Another element of the jet’s salvation, as noted by Grier, may have been a concept in aeronautics known as “ground effect.” In short, ground effect is a change in aerodynamics as an aircraft gets closer to the ground. Because of the way air interacts with the aircraft’s wings as it nears landing, drag is decreased and lift is increased, causing an aircraft to “float,” which is a very plausible explanation for such little damage sustained in this case.

Whether it was a pilot determined to save his plane, physics, some kind of divine intervention, or a combination of all three, the “Cornfield Bomber” remains one of the wildest stories in American aviation history that most people haven’t heard of. Foust remarked in his interview at the museum:

“I don’t know who named it that, or how it got that name. It should be the ‘Wheatfield Fighter.’ But it sounds a little catchier to be the ‘Cornfield Bomber…'”

“…I guess I’m part of a one-in-a-million occurrence. I don’t know that this has ever happened again, this whole scenario. But it is good to see the airplane again, and to know that it’s in the museum here and that this story will live on…”

This article was first published by Sandboxx and can be found here.

Tory Rich is a Marine veteran, and now coaches football and wrestling, so he spends most of his time lecturing younger people about “back in the old days.” Fortunately, there aren’t a lot of kids to tell to get off his lawn deep in the woods of Vermont. Since he got out of the Marines in 2011, Tory got a bachelor’s degree in Kinesiology from UNLV. While he lived in Las Vegas he dabbled in powerlifting and learned just enough about mixed martial arts to get his butt kicked.​