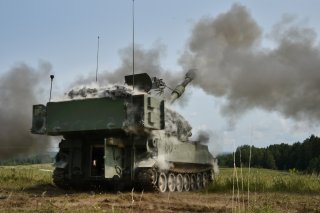 Here's What You Need to Remember: With this kind of scenario in mind, the U.S. Army and Raytheon are working on a newly configured tank-killing “Shaped Charge” 155m precision-guided artillery round as part of a large-scale strategic attempt to outrange enemies and destroy approaching enemy armored columns at safer standoff ranges.