How U.S. Capitol-Style Violence Could Happen in Canada 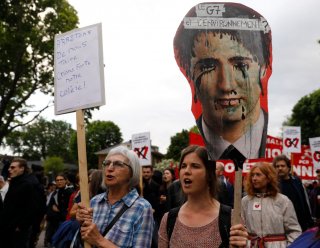 Canadians should not view the recent mob violence in Washington as a uniquely American problem. The polarization that produced the hatred, violence and chaos unleashed by President Donald Trump’s followers on the U.S. Capitol is the product of specific forms of rhetoric — and they exist in Canada, too.

What will keep them from boiling over into violence?

We ought to worry when we see increasing political polarization, and we need to view Jan. 6, 2021, as a reminder that we’re not immune.

Words create worlds, and so violent rhetoric begets violent action. And rhetoric that clears the way for violence has been practised in the same specific ways for thousands of years. Mapping the world through “us versus them” divisions is one of the hallmark characteristics of fascism, the central feature of every Trump speech, and perhaps the best communication practice for inciting violence.

Once the world has been divided and mapped by the demarcation between “us” and “them,” what are known as ad baculum arguments — an appeal to force or intimidation — are often used to silence legitimate opposition. In addition, Trump and his followers use personal attacks and reification (treating another person as an object or a thing) to change the subject, delegitimize others in the public sphere and to strengthen the division between us and them.

These forms of speech are aided by hyperbole. Hyperbole is an intentional exaggeration, not designed to offer an accurate account but instead used to provoke a response and gain attention. These are the rhetorical tactics that lead to violence.

In Canada, you can find all of these on display by taking a cursory glance at the Rebel News website, or listening to Gavin McInnes, the Canadian founder of the Proud Boys organization that helped lead the insurrection in Washington and maintain a following here.

You can also hear the seeds of these kinds of rhetoric in Conservative Leader Erin O’Toole’s speeches and Ontario Premier Doug Ford’s comments on the campaign trail in 2018.

Violent rhetoric produces violence just as a crappy diet produces poor health. What’s the solution? What should we avoid and what should we add to our discursive diet?

Democracies require persuasion and deliberation to guide decision-making about public issues. When we see the use of us-versus-them rhetoric, appeals to force, personal attacks, reification and hyperbole, we need to realize that the person using that kind of speech has decided that they’re not interested in persuasion.

When, instead, communication practices are based on reason, respect and deep listening, we prioritize persuasion in our decision-making. We know that this kind of persuasion can help us make good decisions that lead to prosperity, freedom and equality. In other words, democracies thrive in the presence of forms of persuasion guided by the values of what we have called “strong civility” in our book Beyond Civility: The Competing Obligations of Citizenship.

When we reduce ourselves to ad hominen attacks, ad baculum threats of force and careless hyperbole, we opt out of the democratic ideal of learning to live well with others who are different from us. To opt out of such goals is to accelerate toward the violence and chaos we saw at the U.S. Capitol.

When we embrace the practices and strategies of strong civility instead, then we facilitate co-operation, collaboration and careful reasoning that can hold us together as a nation characterized by diversity. That allows us to make good decisions as we navigate complex collective problems.

The way to prevent what happened in the U.S. from happening in Canada is to consciously choose to avoid rhetoric that leads to violence and to practise strong civility instead. We do that in the same way we embrace a better diet:

Conservative politics, both Canadian and American, have veered too far into the rhetoric of division that have fuelled events like the insurrection. We’ve moved too far away from the forms of strong civility necessary for life in a large, multicultural democracy.

Going too far down the path of division, with too heavy a reliance on the rhetorical techniques that fuel Trump and his supporters, can threaten both the delicate social fabric of our culture and the institutions of governance we’ve designed to manage our collective problems.

Some kinds of rhetoric can set fire to the world; we need to recognize them and choose instead the kinds of communication that fuel healthy democracies and secure the values of freedom and equality.