How the U.S. Military's Light Amphibious Warship Will Combat China 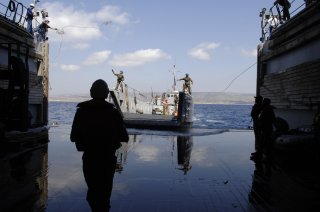 Here’s What You Need to Remember: The Light Amphibious Warfare ships would be crucial for operations in East Asia, responsible for dropping off Marines, ammunition, water, food, and other equipment, picking up the sick and wounded, and shuttling Marine units from island to island.

In conjunction with the U.S. Navy, the Marine Corps is looking for a new warship to bring them from ship to shore. Unlike the little Higgins boats that were instrumental to the Marine Corps’ World War II island hopping campaign, these ships would be much larger, somewhere between 200 to 400 feet long, with around 8,000 square feet of equipment storage space, and room onboard for seventy-five fully-armed Marines.

Rather than replacing any ships currently in service with the Navy or Marine Corps, the Light Amphibious Warships would shuttle groups of Marines around the Western Pacific and providing an entirely new capability.

Ultimately the LAWs would become the backbone of the Corps’ new strategy in the Pacific: Expeditionary Advanced Base Operations. The EABO strategy was developed in order to better respond to the steadily increasing potential for conflict with China in the Pacific. Under the EABO, groups of Marines would maintain a presence on small and remote specks of land throughout the Pacific, armed with anti-ship missiles to take out adversary ships, and with an ability to listen for and sink submarines as well.

The Light Amphibious Warfare ships would be crucially important to this strategy, responsible for dropping off Marines, ammunition, water, food, and other equipment, picking up the sick and wounded, and shuttling Marine units from island to island.

The under the LAW concept, LAWs would be commanded by a Navy officer, and be more than just a transport: there would also be sufficient onboard space for Marines to eat, sleep, and plan out missions. A Navy officer familiar with the LAW program explained that LAWs wouldn’t be designed for combat against other surface ships, but that they would be armed with a 30mm gun provide fire support as well as respond to threats the ships might face.

Given their comparatively light armament, the LAWs would try to evade enemy contact when possible, but wouldn’t operate alone. Operating in squadrons of nine ships, the LAWs would be protected by a larger ship, perhaps a Littoral Combat Ship, that would provide overwatch.

One of the biggest challenges to the program would be balancing costs against capabilities. Ideally, the Corps would like each Light Amphibious Warship to cost around $100 million to $130 million apiece, while ensuring the LAWs are fast enough and protected enough to survive in a contested environment.

The LAWs should be capable of making fifteen knots, the upper limit of what a two-engine ship is capable of. Speeds above fourteen-fifteen knots usually require more engines, which translates into increased costs.

Additionally, the ships should be able to take a punch and remain in the fight. Increased protection to the level of say, a frigate, could potentially make costs balloon to unacceptable levels. The Corps would therefore like to have LAWs that can take a hit and remain afloat long enough to escape, and transfer men and equipment to another LAW or onshore.

This article first appeared in December 2020 and is being reprinted due to reader interest.