How the U.S. Navy's First Aircraft Was Sunk by the...U.S. Navy 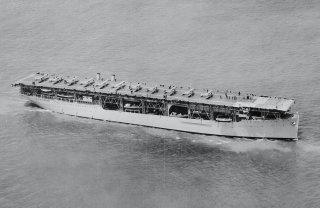 Converted in 1920 from the collier (coal transport ship) USS Jupiter (Navy Fleet Collier No. 3), she was also the Navy's first turbo-electric-powered vessel.

History of the Langley

Following tests in the Atlantic, Langley – named after American aviation pioneer Samuel Pierpont Langley – was used as a test platform for developing carrier operating techniques and tactics while serving in the Pacific Ocean. She had been given the hull number CV-1, but contrary to popular belief it didn't actually stand for "carrier vessel," but rather derived from the cruiser designation.

On October 17, 1922, Lt. Virgil C. Griffin piloted the first plane, a VE-7-SF, launched from the USS Langley's decks. While not the first aircraft to take off from a flight deck, it was a notable moment for U.S. naval aviation. Commander Kenneth Whiting soon became the first aviator to take off from a carrier using a catapult system during the carrier's early tests.

In October 1936, the warship was converted again – from carrier to seaplane tender and was reclassified AV-3. During that conversion, the warship's flight deck was reduced by some forty percent to allow it to operate as a mobile base for squadrons of patrol bombers. She was assigned to Aircraft Scouting Force and had been assigned to the Asiatic Fleet prior to the outbreak of World War II. When the war started, she was off the Philippine Islands, yet was able to make her way to Australia.

In the early stages of the war, Langley assisted the Royal Australian Air Force (RAAF) in running anti-submarine patrols out of the northern port of Darwin.

In late February 1942, commanded by Robert P. McConnell, Langley was carrying thirty-two Warhawk fighters as part of a convoy to aid Allied efforts against the Japanese in the Dutch East Indies. On the 27th of that month, while being escorted by a pair of U.S. Navy destroyers Whipple (DD-217) and Edsall (DD-219), the former carrier was attacked by nine twin-engine Japanese bombers.

Hit three times, the Langley's flight deck was engulfed in flames and the ship took a 10 percent list to port. Sixteen sailors had been killed in the attack. Unable to negotiate the narrow mouth of the Tjilatjap Harbor, Langley lost all power. At 1332 hours the order to abandon ship was passed. Commander McConnell remained on the bridge and manned an anti-aircraft gun while the crew was evacuated.

The escorting destroyers fired nine four-inch shells and two torpedoes into the former coal tender to insure her sinking. Tragically, many of Langley's crew, who had been transferred to the oiler USS Pecos, were lost at sea when the oiler was sunk en route to Australia on March 1. Additionally, thirty-one of the thirty-three pilots assigned to the United States Army Air Force's 13th Pursuit Squadron (Provisional), who transferred to the Edsall were also lost the same day when the destroyer was sunk while responding to the distress call from the Pecos.

It was a sad end for the U.S. Navy's first carrier.