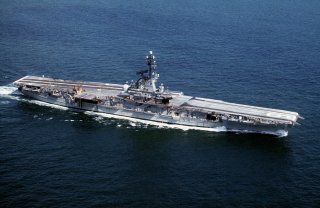 <p><b>Here's What You Need To Remember:&nbsp;</b>On March 4, 2018, an expedition funded by philanthropist Paul Allen discovered the shattered remnants of the carrier USS<em>&nbsp;Lexington</em>&nbsp;two miles below the ocean’s surface in the Coral Sea. The first full-sized fleet carrier to serve in the U.S. Navy, the Lady Lex had sunk to its watery grave nearly seventy-six years earlier, fighting the first, frenetic carrier-on-carrier battle in history.</p>

<p>The&nbsp;<em>Lexington</em>&nbsp;was the fifth U.S. Navy ship to be named after the opening battle of the American Revolution. It and its sister ship the&nbsp;<em>Saratoga&nbsp;</em>were originally designed to serve as battlecruisers, a type of battleship that sacrificed armor in favor of speed. However, construction was delayed during World War I, then impeded by the 1922 Washington Naval Treaty, which placed steep restrictions on the size and number of capital ships.</p>

<p>Rather than scrapping the vessels a quarter of the way into their construction, the Navy decided to reconfigure the two ships into aircraft carriers, at a total project cost of $28 million per ship. At the time, the newfangled carrier had seen&nbsp;<a href="http://nationalinterest.org/blog/the-buzz/the-first-aircraft-carrier-air..." target="_blank">limited action during the Great War</a>, and the treaty permitted each nation two carriers displacing no more than thirty-three thousand tons.</p>

<p>The Navy had earlier experimented&nbsp;<a href="http://nationalinterest.org/blog/the-buzz/the-real-reason-the-world-need..." target="_blank">with its first aircraft carrier, USS<em>&nbsp;Langley</em></a>, a converted oiler displacing fourteen thousand tons that had a completely flat flight deck and accommodations for thirty-six combat aircraft. The&nbsp;<em>Lexington</em>&nbsp;and&nbsp;<em>Saratoga&nbsp;</em>were significantly larger fleet carriers, measuring over 270 meters long and displacing thirty-six thousand tons empty<em>&nbsp;</em>(a bit in excess of the treaty limit!)—that also introduced the “island” superstructure housing a combined bridge and control tower the starboard side of the deck, now a standard feature on carriers. As the Navy’s second carrier, the Lexington was designated CV-2, and its scout, bomber, torpedo and fighter squadrons were numbered VS-, VB-, VT- and VF-2, respectively.</p>

<p>The Lexington’s three-square-kilometer aircraft hangar was the largest seaborne hold ever made at the time of its launch, affording it the space for an air wing of 80 to 110 aircraft that could be ferried to the deck by way of two elevators. Numerous arresting wires both perpendicular and parallel to the flight deck helped snag landing aircraft before they went overboard, though the parallel wires were later removed. The carrier also boasted an “antitorpedo system,” in the form of spaced bulkheads that shielded the ship’s huge stores of aviation fuel from explosions.</p>

<p>The “Grey Lady” also retained design features that betrayed its battlecruiser heritage, including armor belts up to seven inches thick, and eight ship-killing eight-inch guns in four turrets—even though firing them across the flight deck was a risky proposition. (You can see them<a href="https://en.wikipedia.org/wiki/USS_Lexington_(CV-2)#/media/File:USS_Lexington_(CV-2)_firing_203mm_guns_1928.jpg" rel=" noopener noreferrer" target="_blank">&nbsp;here</a>.) These were supplemented by large five-inch antiaircraft guns, and numerous machine guns and autocannons.</p>

<p>The&nbsp;<em>Lexington&nbsp;</em>and&nbsp;<em>Saratoga&nbsp;</em>were finally commissioned in 1927 and, like affectionate siblings, were soon playing hide-and-seek in the Pacific Ocean. Carriers had never engaged each other in battle before, but the U.S. Navy now had three of them to figure out how to do it. This involved an intricate dance of dispatching scouts, maintaining a round-the-clock Combat Air Patrol (CAP) to intercept enemy scouts and attackers, and launching massed airstrikes to eliminate the opposing carrier once its position was known. The&nbsp;<em>Lexington</em>’s air wing also successfully launched “surprise attacks” on Pearl Harbor on at least three occasions—a learning experience that clearly was not adequately heeded.</p>

<p>In between the naval “problems,” as these war games were known, the Lexington once used its turboelectric drive to power the entire city of Tacoma, Washington for a month after a drought temporarily disabled its hydroelectric dam, and airlifted supplies to an earthquake-stricken Nicaragua in 1931. The Grey Lady<em>&nbsp;</em>was also used to test capital-ship refueling operations at sea, a technique that became standard practice in World War II.</p>

<p>Science fiction author Robert Heinlein, known for&nbsp;<em>Starship Troopers&nbsp;</em>and&nbsp;<em>Stranger in a Strange Land</em>, served as a communications office on the Lady Lex, and had a short story rejected in a shipwide writing contest. The young ensign dated one of the daughters of Ernest King, the Lex’s captain at the time—and the future commander in chief of the U.S. Fleet during World War II.</p>

<p>Like the rest of the U.S. carrier force, the&nbsp;<em>Lexington</em>&nbsp;was safely at sea when Japan launched its&nbsp;<a href="https://warisboring.com/japans-midget-submarine-attack-on-pearl-harbor-w..." rel=" noopener noreferrer" target="_blank">crippling surprise attack on Pearl Harbor</a>. Under Capt. Frederick Sherman, it was dispatched on a failed attempt to relieve the besieged garrison of Wake Island—it fell before it could arrive—and sparred inconclusively with Japanese submarines in January 1942.</p>

<p>The Lexington’s air wing was not its best at the beginning of the World War, including outdated types such as the clumsy F2A Buffalo fighter, nicknamed the “Flying Coffin” by Marine pilots, and the ill-fated three-seat TBD Devastator torpedo bomber, which was easy pickings for fighters and antiaircraft guns alike due to its slow maximum speed (206 miles per hour), poor armor and general ungainliness.</p>

<p>The Lexington also soon traded in its Buffalos for Grumman F4F Wildcats, which had a maximum speed of around 330 miles per hour. These stubby blue fighters were less maneuverable and slower climbers than the deadly Japanese A6M Zero fighter, but could hold their own due to superior armor and diving speed.</p>

<p>Another addition to the&nbsp;<em>Lexington&nbsp;</em>made five months prior to the Pearl Harbor attack enhanced the effectiveness of its Wildcats: a first-generation CXAM-1 radar, which had an aerial detection range of fifty to one hundred miles and a sea-search capability of slightly over a dozen. Primitive by modern standards, the CXAM gave early U.S. carriers vital minutes of advance warning.</p>

<p>Finally, in February, the&nbsp;<em>Lexington&nbsp;</em>set off to raid the Japanese base at Rabaul on the island of New Britain. However, the surprise attack was spoiled when it was spotted by a four-engine H6K seaplane; its fighters shot down two of the flying boats, but not before they had reported its position. Captain Sherman called off the raid but decided to stay in the area to lure attacking Japanese bombers into the guns his fighters. This was a risky move, as if the bombers managed to evade the Lexington’s CAP, they might claim the first U.S. fleet carrier of the war.</p>

<p>As it was, the Lexington’s patrol was caught in between shifts at 4:25 p.m. when its radar detected nine G4M “Betty” twin-engine bombers of the Fourth&nbsp;<em>Kokutai</em>&nbsp;(Group) approaching from the west. In a burst of activity, the Lexington managed to scramble nineteen Wildcats and even a few SBDs to intercept them.</p>

<p>However, while that dogfight raged, fifteen minutes later another eight<em>&nbsp;</em>Bettys were detected by radar just twelve miles to the east! There were only two Wildcats left to dispatch—and the guns on one of the fighters immediately jammed.</p>

<p>The remaining Wildcat was piloted by Lt. Edward “Butch” O’Hare. A native of St. Louis, Missouri, he was the son of a lawyer who had testified against Al Capone, with fatal consequences. In an astounding feat of aerial gunnery, O’Hare single-handedly shot down three and damaged three more of the large, cigar-shaped bombers, despite their four defensive machine guns and tail-mounted cannons. (At the time O’Hare was credited with five kills.) He accomplished this with just 450 rounds of ammunition each in of his Wildcat’s four .50 caliber machine guns.</p>

<p>The few G4Ms that reached the frantically zigzagging carrier missed with their bombs—one even unsuccessfully attempted a kamikaze attack, as you can see in&nbsp;<a href="https://en.wikipedia.org/wiki/USS_Lexington_(CV-2)#/media/File:G4M_shot_down_near_USS_Lexington_(CV-2)_1942.jpeg" rel=" noopener noreferrer" target="_blank">this photo</a>—and most were shot down shortly after. Only three G4Ms made it back to base, while two Wildcats were lost to defensive fire.</p>

<p>O’Hare was awarded the Medal of Honor for his actions and received a thousand cartons of cigarettes from Grumman, the Wildcat’s manufacturer. He would later fall to friendly fire in a nighttime aerial battle with Betty bombers in 1943, and would be commemorated in 1949 with the naming of O’Hare International Airport in Chicago.</p>

<p>Sixteen days later it was back in Pearl Harbor, where the venerable carrier finally had its eight-inch gun turrets removed in exchange for additional rapid-fire antiaircraft batteries. The Navy finally appreciated that the carrier’s ability to launch and defend against swarms of aircraft that could attack targets hundreds of miles away was more important than a few extra big guns.</p>

<p>Come May, the&nbsp;<em>Lexington</em>&nbsp;would finally engage Japanese carriers in a first-of-its-kind conflict it had spent more than a decade preparing for—the pivotal Battle of the Coral Sea.</p>

<p><em>Sébastien Roblin holds a Master’s Degree in Conflict Resolution from Georgetown University and served as a university instructor for the Peace Corps in China. He has also worked in education, editing, and refugee resettlement in France and the United States. He currently writes on security and military history for&nbsp;</em><a href="https://warisboring.com/" rel=" noopener noreferrer" target="_blank"><em>War Is Boring</em></a><em>. This article first appeared in March 2020.</em></p>