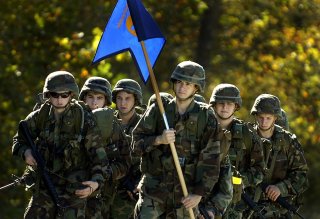 Here's What You Need to Know: While various kinds of hand-to-hand combat training have been part of West Point cadet training since the early 1900s and before, Larsen was first to introduce the integrated Combatives concept to West Point in the mid-1990s.

Combatives, now being taught to every cadet at West Point, is built upon the reality that large percentages of casualties in warfare take place within an immediate sphere of five feet, Matt Larsen, Director of the Combative Program at West Point, told Warrior Maven Global Security in an interview.

Larsen runs the West Point program and operates a long-standing consulting practice which brings Combatives training to a range of entities including the US military, friendly foreign forces and law enforcement organizations.

While various kinds of hand-to-hand combat training have been part of West Point cadet training since the early 1900s and before, Larsen was first to introduce the integrated Combatives concept to West Point in the mid-1990s.

The training prepares for fights wherein an enemy quickly reaches for a gun or knife or attempts to take a weapon from a person they are attacking. Confrontations of this kind require an integrated approach - blending physical strength, hand-to-hand attack and close-in weapons use.

Fast-changing combat scenarios require strength, maneuverability and crucial judgement regarding when and how to move. An ability to anticipate enemy moves and counter weapons, firearms and hand-combat attacks is fundamental to the training. Learning how to learn, Larsen says, is a key to making progress.

“Fights are all about range and angle,” he added.

Larsen was an employee of Torres which in addition to combatives supports the US State Dept., DoD, DoJ and other elite US agencies offering a range of security and training services. Torres guards numerous US Embassies and DoD Forward Operating Bases around the world, works with friendly foreign governments and trains clients in a range of areas - to include cybersecurity, cyber and digital forensics, law enforcement, prison operations, government transformation, combatives, linguistics and other areas.​

Working for Torres, Larson taught Combatives and Close Quarter Battle (CQB) to US Forces in Iraq. CQB, as one might expect, took on a new urgency following the 2003 invasion of Iraq. Small ground units were routinely called upon to “clear areas,” attack and engage small groups of insurgents and engage in high-stakes combat in close-quarter buildings and urban environments.

"We were glad to have Matt's expertise in bringing a unique blend of combat skill to our soldiers in Iraq. This kind of integrated "close-in" training seems to address an often unrecognized need to prepare for how fights happen," Torres CEO Jerry Torres told Maven.

The training, described by Larsen as a process rather than a particular event or tactic, operates on the assumption that many close-in fights typically involve a combination of knives, guns and a need for physical combat.

“When was the last time a group of soldiers went into a building where they could shoot everybody in there? You cannot be proficient at clearing a room unless you are proficient in hand-to-hand combat,” Larsen explained.

Grounded in what Larsen points to as a “warrior ethos,” Combatives training explores the full range of dynamics associated with close-in combat. This includes assessments of pre-combat cues, ways to quickly access a weapon, block a sudden attack and maintain the requisite level of readiness for moments when fights might erupt.

Combatives skill can not only lead to more successful attacks or warzone engagements but can also at times prevent violence from escalating to a lethal level. For instance, what are someone’s options at a security checkpoint when an intruder causes problems? Larsen asked.

“If you do not have hand-to-hand combat skills, your only option is lethal,” he said.

There are also, quite naturally, many key applications of Combatives for police forces and other law enforcement entities.

“31-percent of police are killed from within five feet. 38-percent of the fatalities do not involve marksmanship,” Larsen said.

This article first appeared on Warrior Maven in 2018 and is being republished here due to reader interest.