How Worried Should We Be About Russia and China's Joint Military Exercises? 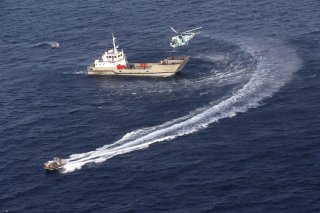 Here's What You Need to Remember: Russia and China have moved closer together in recent years, and have an ongoing military partnership. This past August, forces from the two nations took part in an exercise involving a joint command and control system, while Russian troops integrated into Chinese formations.

The United States Navy has conducted a series of joint exercises with allies and regional partners in the Western Pacific as a show of force and unity in defiance to Beijing, but now the People’s Liberation Army Navy (PLAN) has conducted its own joint exercise with Russia. From October 17 to 23, for the first time ever, Russian and Chinese warships took part in a joint patrol.

“The tasks of the joint patrolling were to demonstrate the state flags of Russia and China, maintain peace and stability in the Asia-Pacific region and also protect facilities of both countries’ maritime economic activity,” Russia’s Ministry of Defense said in a statement to reporters on Saturday. “During the patrol, the group of warships passed through the Tsugaru Strait for the first time.”

The patrols included a total of ten warships, five from each nation, and covered 1,700 nautical miles, including the Tsugaru Strait, which is the body of water between the Japanese islands of Honshu and Hokkaido that connects the Sea of Japan with the Pacific Ocean. The two navies practiced joint tactical maneuvers and conducted a variety of military drills.

According to a report from TASS, the Russian Navy was represented in the joint naval taskforce by the Pacific Fleet’s forces that included the measuring ship Marshal Krylov; the large anti-submarine warfare (ASW) ships Admiral Tributs and Admiral Panteleyev; and the Project 20380 corvettes Hero of the Russian Federation Aldar Tsydenzhapov and Gromky.

The PLAN was represented by the destroyers Kunming and Nanchang; the corvettes Qinzhou and Luzhou; and the supply ship Dongpinghu.

Russia and China have moved closer together in recent years, and have an ongoing military partnership. The two nations have conducted a series of joint military drills, the most high profile of which was “Vostok 2018,” which involved a simulated battle involving a Russian-Chinese coalition engaged with a fictional enemy.

This past August, forces from the two nations took part in an exercise involving a joint command and control system, while Russian troops integrated into Chinese formations.

Russian Federation president Vladimir Putin has an ally in Chinese president Xi Jinping, and Chinese foreign ministry spokesperson Zhao Lijian told reporters at a news briefing in June that the two countries were “united like a mountain” with an “unbreakable” friendship, CNN reported.

However, the question of the regional goals of the two countries still remains an issue. As the Jamestown Foundation noted this month, “Below the surface, not everything is smooth in China-Russia relations, but it can be difficult to see past the exaggerated plaudits generated by powerful propaganda machines on the unique closeness of the two strategic partners.”

Ties between Beijing and Moscow have been growing since 2005 when a long-standing border dispute was resolved, while the strategic partnership has been going strong since 2014 when Russian entered into its confrontation with the West over its aggression against Ukraine.

Yet, just as China has shown no intention of involving itself with Ukraine, Russia likely would like to stay clear of any confrontation involving Taiwan. Thus while the two countries may show a close partnership, neither would likely step up to support the other’s long-term goals.