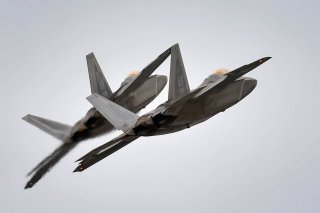 Way back in 1999, Lockheed Martin had a plan to field a delta-shaped stealth fighter that skipped the need for a conventional tail section, in the F-22-based X-44 Manta.

Instead of using a conventional tail section with both vertical and horizontal control surfaces, the Manta aimed to leverage thrust vector control, or directing the flow of the engine’s thrust to give the aircraft the acrobatic capabilities it would need in a high-end dogfight. Today, more than two decades later, that same concept appears to be found consistently across nearly all official renderings of the Air Force’s next air superiority fighter being developed under the NGAD, or Next Generation Air Dominance, program, begging the question… could elements of the X-44 Manta have found their way America’s next top-of-the-line fighter?

Last year, the U.S. Air Force shocked the world with the announcement that they had already designed, built, and tested a prototype aircraft out of their Next Generation Air Dominance program. This new jet promises to be more advanced than any fighter to ever come before it, designed to not only do battle with the advanced 5th generation fighters being churned out by America’s opponents in Russia and China, but to dominate them for decades to come.

At right around the same time, the Air Force also unveiled a birthday-celebrating image seemingly showing a wedge-shaped aircraft with no conventional tail section, prompting some to wonder if the artist’s handiwork had anything to do with the NGAD announcement that came alongside it. Since then, other official images out of the Air Force, along with renderings from prominent aviation firms like Lockheed Martin, have all shown similar wedge-shaped aircraft.

Some, including me, have pointed toward Northrop’s highly capable but ultimately passed-over YF-23 Black Widow II as the stealthy precedent for this tailless design, but Northrop isn’t the only show in town that knows how to build a stealth fighter without a tail.

In fact, based on some of these artist’s renderings and the practical limitations of developing a new fighter on a short fuse, the X-44 Manta may represent an early iteration of what has or will become at least part of America’s next prizefighter in the sky.

The X-44’s name, or more appropriately, its acronym, gets straight to the intent behind the concept. After decades of rapid fighter development, some things had simply come to be considered standard fare for a capable tactical aircraft: things like a conventional tail section with vertical and horizontal control surfaces. While both the F-22 and later, the F-35, adopted slightly different tails than you’d find on a non-stealth 4th-generation fighter like the F-16, the X-44 Manta aimed to pull off the same sort of maneuverability without the need for all those tail surfaces. With no tail section, the aircraft’s radar return would be dramatically reduced, creating an even stealthier fighter than America’s highly capable F-22.

So, logically enough, Lockheed Martin partnered up with NASA to talk about how to bring this concept to fruition. Successfully making an acrobatic fighter that could forgo using its tail for handling would mean relying heavily on using thrust vector controls to change the direction of the fighter’s flight path. NASA had already had a great deal of success using thrust vector controls on a high-performance fighter in the F-15 ACTIVE, which was a modified F-15 Eagle that used front wing canards (taken from the tail section of an F/A-18 Hornet) and thrust vectoring jet nozzles to produce a fighter that could outperform the legendary Eagle in almost every appreciable way.

Related: F-15 ACTIVE: THIS FRANKENSTEIN FIGHTER WAS BETTER THAN THE EAGLE

Put in its simplest terms, thrust vector control offers the ability to aim or point the nozzle of the jet engine. In some platforms, like the F-22 Raptor, that nozzle aiming is done on a single plain (up or down), while in other jets like Russia’s 4th-generation Su-35, the nozzle can move in 360 degrees, offering even more dramatic options when it comes to rapidly shifting directions.

In a head-on engagement, the F-22 Raptor’s thrust vectoring can allow the pilot to point the nose and weapons of the fighter down at an enemy jet as it passes by, all while continuing to push in the same original direction. In a close-up scrap between two fighters who are trying to successfully turn tighter than the other to get weapons lock, that same thrust vectoring capability allows jets like the F-22 and Su-35 to change directions far more aggressively than any advanced jet without thrust vector controls can.

While the F-22 leverages thrust vector control alongside its more conventional tail section, Lockheed Martin proposed using the F-22 design as a starting point for this new technology demonstrator that could prove just as capabley as the fighter designs we’ve come to see as conventional in recent decades.

An F-22 Raptor without the tail

Because the concept wasn’t being pursued as a clean sheet fighter development program, but rather as a technology demonstrator effort, starting from scratch on an aircraft design didn’t seem practical. Instead, Lockheed Martin volunteered the F-22 Raptor. While not the most recent stealth fighter out of Lockheed Martin’s Skunk Works (the F-35 Joint Strike Fighter began test flights three years prior), the F-22 was–and is—America’s best and most capable fighter when it comes to engaging enemy jets. It also already boasts thrust vector control, making it a logical choice for an experiment so focused on that specific capability.

The X-44 Manta wasn’t the only F-22 based concept rolling around at the Pentagon at the time. As the world’s first operational stealth fighter, the first fighter to christen the new “5th-generation” of jets, and arguably the most potent air superiority aircraft ever to fly in service for any nation, it makes sense that the United States would have considered leaning into the F-22 program for other, more specialized roles. While the X-44 concept aimed to saw off its tail and make the F-22 even sneakier, the Sea Raptor effort would have placed F-22s aboard America’s fleet of supercarriers–offering a jet that could fly faster, further while carrying more ordnance than the F-35C’s now destined for Uncle Sam’s flat tops.

Related: SEA RAPTOR: THE NAVY’S SWEEP-WING F-22 THAT WASN’T TO BE

The F-22 Raptor had already set itself apart from the rest of the fighter world thanks to its creators leveraging stealth as a part of the fighter’s very design. While previous and highly-capable air superiority fighters like the F-15 relied on sheer performance to win scraps in the air and only later incorporated things like radar-absorbent coating to slow detection, the F-22’s very design was intended to postpone or defeat detection entirely. From there, its two powerful Pratt & Whitney F119 engines could still push the stealthy fighter to speeds as high as Mach 2.25, and its thrust vector controls allowed it to pirouette away from any inbound missiles that may have managed to secure a hard-to-come-by lock. Today, the F-22 remains the most highly capable air superiority fighter on the planet, and in 1999, its lead over the competition was even more pronounced.

But even the incredible F-22 could be even better if it could be even stealthier, and that’s where a tailless delta design could have produced real results. If the X-44 Manta could have offered similar performance to the F-22 while also being even harder to detect, it may have been enough to push this aircraft concept off of Lockheed’s notebook pages and into their production facilities. But it wasn’t just stealth the X-44 did better. It also carried a whole lot more hate.

Some of the strengths of the F-16XL

While the tailless wedge shape of the X-44 Manta would benefit its stealth profile, it also came with some other significant advantages over America’s existing stealth fighters, like payload capacity and range. America’s F-22 Raptor can carry a maximum of six air-to-air weapons internally and the F-35 Joint Strike Fighter is limited to just four–but the broad fuselage of the wedged-shaped X-44 would almost certainly have allowed for far more ordnance, both in terms of carrying space inside the aircraft and overall payload capability as a measure of lift and fuel economy.

First developed as the F-16 SCAMP and later matured into the F-16XL that would compete with (now) Boeing’s F-15E Strike Eagle in the Enhanced Tactical Fighter (ETF) competition, the F-16XL also leveraged a broad, wedge-shaped fuselage that granted it superior lift, range, fuel capacity, and payload over the standard F-16 Fighting Falcon. The F-16XL wasn’t worried about stealth, so it carried its weapons on external hardpoints, but thanks to the increased surface area of its wedged-wing design, the F-16XL had hard points for an astonishing 27 weapons, as compared to the F-16’s standard nine.

It’s unclear just what a sort of boost to payload or range the X-44 Manta may have offered over the F-22, but it would have benefitted not only from the increased internal payload space, but also the increased lift provided by the broader lifting body. That lift could help support more weight while also offering greater efficiency in fuel use.