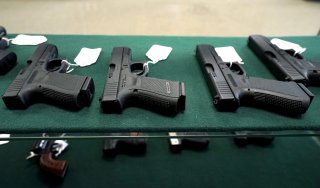 Here's What You Need To Remember: The Glock 41 may be a large pistol, but that works in the gun’s favor when shooting larger caliber bullets. Although, as a competition gun, it should have widespread appeal among both big bore enthusiasts and smaller caliber Glock owners interested in expanding their horizons. While larger and differently chambered than the rest of the pack, it’s still a Glock at heart.

Glock’s ecosystem of guns, all based on a common operating system but diversified into different calibers and sizes, has proven a highly successful tactic for the company. One of the largest Glocks, by caliber and size, is the Glock 41. The Glock 41 is marketed towards competition shooters and those who desire a softer shooting .45 automatic.

Glock’s original nine-millimeter pistol, the Glock 17, was designed by self-taught gun designer Gaston Glock to compete for an Austrian Army sidearm contract. The Glock 17 used a polymer frame to save weight, a two column high-capacity magazine that put the “17” in Glock 17, and, above all, featured outstanding reliability.

The pistol caught on in the United States, bolstered by unfounded claims it was “undetectable” in airport metal detectors. Glock’s business exploded and the company hit upon a novel idea: port the basic gun operating system down to the appearance, to as many calibers and sizes as possible. While many gun companies eventually followed the Austrian firm’s lead, Glock was the first to push a single pistol design in so many variations.

One of the first variations in the Glock line was the Glock 21, followed by the Glock 41. Both Glocks were based on the original Glock 17 but rechambered for .45 ACP. One of the major advantages to the Glock 21 and 41 was the use of a double-column magazine to create a pistol that held thirteen rounds of .45 ACP. That was nearly twice as many rounds as the 1911A1 series of pistols, which maxed out at eight rounds. While 1911A1 owners are notoriously hard to win over, the Glocks were a welcome addition to the .45 ACP pistol market.

The Glock 41 is not a small pistol; at 8.78 inches with a 5.31-inch barrel, it is the longest Glock on the market. The company advertises it as a “long slide” pistol with a long sight radius, especially for competition shooters. At 5.47 inches it is slightly shorter than the Glock 21, and a slide inch of exactly one inch makes it one of the narrowest of the Austrian gun maker’s offerings.

The combination of polymer slide and steel frame not only makes the pistol durable but lighter than an all-steel pistol. The Glock 41 weighs just 36.51 ounces with a loaded 13-round magazine, even less than a shorter, similarly configured Glock 21. More than a third of that weight is in large, 230-grain bullets and the pistol weighs just 26 ounces unloaded.

The Glock 41 is the same double action, striker-fired pistol as every other Glock. The model 41 also has the same three safeties found on the company’s other pistols: a trigger safety to ensure that a finger is present, a firing pin safety, and a drop safety to prevent accidental firing when dropped. All three safeties must be disengaged in order for the gun to fire. Like all Glocks, the model 41 does not have a manual safety to prevent the trigger from being pulled.

The long sight radius, longer barrel and light trigger pull make the Glock 41 an excellent competition pistol. The pistol reportedly features less muzzle flip than other Glocks, a condition whereupon the muzzle rises sharply after firing. This is likely due to the presence of additional weight in the slide and barrel but is also a function of the pistol’s excellent ergonomics. Although considered a competition shooter, the ability to control muzzle rise should make the Glock 41 a consideration for anyone who is wanting a .45 caliber Glock but is concerned with muzzle flip. As a competition pistol, the long slide gun has a trigger pull of 24 Newtons, versus the Glock 21’s 28 Newtons.

The Glock 41 may be a large pistol, but that works in the gun’s favor when shooting larger caliber bullets. Although, as a competition gun, it should have widespread appeal among both big bore enthusiasts and smaller caliber Glock owners interested in expanding their horizons. While larger and differently chambered than the rest of the pack, it’s still a Glock at heart.