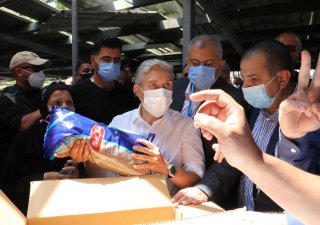 The Aug. 4 explosion in Beirut, Lebanon killed almost 200 people, injured thousands, caused US$10 billion to US$15 billion in damage and displaced 300,000 people. Despite the strong show of social solidarity and humanitarian aid, these humanitarian actions remain fragmented and unequal: They did not equally reach affected individuals and neighbourhoods. They remain fragmented based mainly on citizenship and class status.

Beirut, like other major cities, is incredibly diverse — among those killed, 46 were Syrian refugees and more than a dozen were migrant workers. The losses affected Lebanese, Syrians, Palestinians and migrant workers such as Bangladeshis, Ethiopians, Sri Lankans, Kurds and Ghanaians.

As a researcher whose primary work is related to sustained solidarity, I offer my critical insights based on the observations that I and other volunteers have witnessed in the field in Beirut.

The blast occurred at a time when Lebanon is facing multiple overlapping crises: financial, fiscal, political and health. These ongoing challenges have pushed an estimated 55 per cent of Lebanese citizens into poverty.

In the absence of functional government support, citizens and residents have taken on some of the post-disaster recovery, including cleaning the streets of debris, cooking and distributing food to displaced people and volunteers, surveying damaged buildings, helping locate missing individuals and pets and donating material goods.

As millions of dollars are being donated and as thousands of volunteers take on post-disaster recovery, it is essential to consider how different solidarity actions reproduce inequality in Lebanese society.

Beirut neighbourhoods are shaped by a long history of forced displacements, civil and regional wars and post-war reconstructions.

For instance, Karantina, one of the neighbourhoods in the vicinity of Beirut port, is a low-income working-class and multi-ethnic neighbourhood, historically inhabited by forced displaced groups, such as Armenians, Palestinians, Bedouins and Lebanese from rural areas. In recent years, Karantina became a destination for Syrian refugees and other migrant workers.

Similarly, Khandaq al-Ghamiq, at the west end of the Beirut port, is inhabited by Lebanese from rural areas who moved to Beirut in the 1960s to work at the port.

On the other hand, Ashrafieh, historically a middle-class neighbourhood, has undergone gentrification during the post-war reconstruction to become a neighbourhood for wealthy individuals and businesses. Gemmayzeh and Mar Mikhayel were similarly reconstructed to become the hub of small businesses, trendy nightclubs and bars at the expense of affordable living.

Lebanon hosts the largest number of refugees per capita in the world, the vast majority originating from Syria, then Palestine, Iraq and Sudan.

Widad (a pseudonym), a Syrian refugee in her 40s, lives in a working-class neighbourhood in Beirut. I met Widad while volunteering; she showed me the wounds on her body from the explosion and told me:

“All my family was injured. My apartment is destroyed and the whole building is about to collapse. My husband is still hospitalized. There is no one to help us because we are poor Syrians.… A group of well-intentioned people visited us the first few days, offering us sandwiches. But what would a sandwich do? We have nothing. We do not have drinking water nor a toothbrush. I have not showered in days. There is no soap, no shampoo, not even clean water. We are still waiting for these associations that collect money on our behalf. I am unable to go anywhere with my injuries. I cannot leave my daughters alone at home.”

Various volunteers, including myself, remarked that in the first week after the explosion, post-disaster recovery was concentrated in middle- and high-class neighbourhoods such as Geitawi, Mar Mikhael and Ashrafieh, where residents are mainly Lebanese middle-high income class. Simultaneously, there has been a deliberate neglect for the immediate relief of other equally affected and historically marginalized neighbourhoods, such as Karantina and Khandaq al-Ghamiq. Beirut’s neighbourhoods are clearly identifiable based on many factors, mainly differences in class and citizenship.

Reports from the field documented many incidents of racism towards non-Lebanese, accusing Syrian and Palestinian refugees or Sri Lankan, Bengali and Ethiopian migrant workers, for instance, of exploiting the humanitarian aid relief and denying them certain donations.

A worker at an international aid organization clearly identified in a televised interview broadcast on France24 that their organization received funding to help “Christian families in Achrafieh, Beirut.”

A visit to the marginalized neighbourhoods of Karantina and Khandaq al-Ghamiq show the relatively low presence of local and international NGO solidarity tents, and the prevalence of unorganized and sporadic small groups of volunteers.

One week after the explosion, another international NGO helping refugees in Lebanon has established a hotline to collect data about the immediate needs of people. The hotline was operating for only eight hours a day. Simultaneously, it sent its employees to survey in the middle-class neighbourhoods, while most of the refugees live in the working-class area of Karantina.

The humanitarian aid following the Beirut explosion is necessary and ongoing. It is still surveying and distributing immediate relief to affected communities. But this response is unequally distributed and reproduces racism and inequality. At this critical time, it is imperative to build genuine and egalitarian humanitarism.