Hurricane Dodging: The Air Force Has More to Worry About Than China 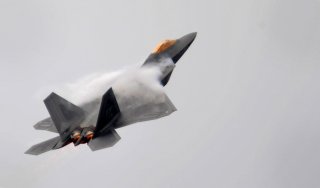 Here's What You Need To Remember: The F-22 Raptor may be the most elusive fighter ever built. But this October, the Air Force discovered that a Raptor with its wings clipped can’t evade the force of nature.

Tyndall stood almost directly in the path of Michael when it made landfall in the neighboring coastal town of Mexico Beach, Florida, on October 10. The storm flipped a fourteen-ton F-15 used as a monument on its back, destroyed all of the homes of base personnel and their families, scattered trailers like matchsticks, shredded trees, and peeled off metal roofs. Tyndall’s drone runway, flight line, and marina sustained catastrophic damage.

Nonetheless, the damage is particularly biting because the Raptor is no longer in production, is unlikely to ever be built again and the Air Force has only around 120 Raptors in operational units, plus another sixty-four assigned for reserve, training, and testing. That implies roughly 10 percent of the active-duty Raptor fleet was taken out of service by the storm. The small Raptor force is expensive to operate ($58,000 per flight hour, three times the cost of an F-16), but the fifth-generation stealth aircraft remain the U.S. military’s preferred weapon for countering the latest 4.5-generation jets like the Russian Su-35 or China’s J-20 stealth fighter and J-11D.

The inability to move the non-flyable Raptors out of Tyndall is not a black mark on the short-term evacuation effort. Most U.S. fourth-generation jet fighters require around twenty man-hours of maintenance for every one hour of flight—the Raptor requires over forty hours. Therefore, simply getting that many aircraft in flyable condition and out of the base at the same time nearly all the personnel were being evacuated was a major logistical feat. Methods for moving non-ambulatory fighter jets by air or ground transport would have required days of preparation time and logistical assets that were manifestly impractical during the scramble to evacuate. By the time the danger posed by Hurricane Michael was clear, there simply was not enough time to arrange for them.