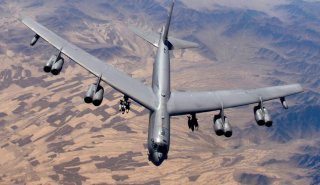 Here's What You Need to Remember: Accommodating hypersonics into a B-52 pr B1 bomb-bay brings a number of strategic implications. Not only does it massively increase the target envelope and range, but it also allows for longer mission “dwell” time over targets to sustain attacks.

The Air Force will again be firing hypersonic missiles from B-52 bombers later this year as part of a massively fast-tracked effort to arm its force with ultra-high speed, nearly indefensible attack weapons able to destroy targets traveling at five times the speed of sound.

The service has already conducted a captive carry test of its Air-Launched Rapid Response Weapon (ARRW) on a B-52 and also configured its B-1 to fire hypersonic weapons as well.

“We have done some flight tests of ARRW and we will do tests later this year,” Gen. Timothy Ray, Commander, Global Strike Command, told reporters at the 2021 Air Force Association Symposium.

Accommodating hypersonics into a B-52 pr B1 bomb-bay brings a number of strategic implications. Not only does it massively increase the target envelope and range, but it also allows for longer mission “dwell” time over targets to sustain attacks.

Boost-glide hypersonic weapons, according to a Raytheon expert hypersonic weapons developer, propel a glide vehicle up into space where it “skips off the upper atmosphere,” before relying upon the sheer speed of its descent from high altitudes to achieve a destructive impact.

An interesting December 2020 Congressional Research Service essay says the ARRW was intended to build upon DARPA’s Tactical Boost Glide technology to develop and air-launched hypersonic glide vehicle prototype “capable of traveling at average speeds of Mach 6.5 and Mach 8 at a range of 1,000 miles.”

The CRS report continues to cite now former Air Force Acquisition Executive Dr. William Roper explained the service’s rationale for choosing the ARRW because it is smaller. The result is that the B-52 can carry twice as many weapons as other proposed alternatives and the ARRW “could be on the F-15,” due to its size and transportability.

Hypersonic attacks from the air of course introduce a decidedly different kind of attack option for commanders who may wish to destroy enemy targets ahead of any larger-scale air attack. In the case of a larger, not-very-stealthy B-52, an ARRW might enable successful precision strikes at much more survivable ranges. Hypersonics can also bring new levels of precision when compared with other long-range attack options.

“Unlike ballistic missiles, hypersonic weapons do not follow a ballistic trajectory and can maneuver en route to their destination,” the CRS report says. As Vice Chairman of the Joint Chiefs of Staff and former Commander of U.S. Strategic Command General John Hyten has stated, hypersonic weapons could enable ‘responsive, long-range, strike options against distant, defended, and/or time-critical threats [such as road-mobile missiles] when other forces are unavailable, denied access, or not preferred.’”