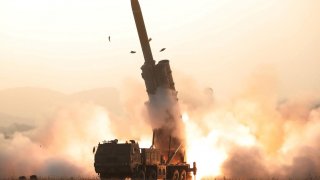 Here's What You Need To Remember: North Korea must seize territory—and quickly—to win any kind of war.

Recently, I wrote of my defeat at the hands of Supreme Commander of the Korean People’s Army Kim Jong Un and the North Korean People’s Army, and how I lost a nation with the world’s 12th largest economy to a backward state with fewer paved roads than Haiti.

In a game called Next War: Korea, that is.

Painful as that was, losing the Korean peninsula to totalitarianism taught me some surprising lessons, many of which run counter to conventional wisdom about a real war.

(This is part three of three. Read parts one and two.)

Would these lessons apply to a real war in Korea? I’m not sure, and I doubt anyone is. But they’re worth thinking about, all the same.

The U.S. is putting too much faith in air power.

U.S. and South Korean air forces are together much more powerful than their North Korean counterparts, and are meant to help turn the tide of battle. Unfortunately, the North Koreans have chosen to counter allied air power asymmetrically not by building up an air force, but by attacking aircraft and air bases on the ground.

For the first 10 days of fighting — the most decisive period — allied air power is crippled and cannot perform as intended.

Reservists are great, but a bigger standing South Korean army is better

South Korea has a large army, but a major portion of it is in the form of reservists who are called up only after war starts. In the game, the mobilization of reservists was disrupted by commando attacks, leaving active-duty forces to hold the line. I needed more front-line, active-duty South Korean army units capable of working independently in smaller, brigade-size formations.

As janky as it is, the North Korean Air Force still has value

Sure, the NKAF is mostly a bunch of antiquated aircraft flown by pilots of questionable skill. In effectiveness it ranks far below Western standards. But as the game makes clear, it still has a lot of airframes, each of which could potentially cause problems. A single plane could wreck Seoul’s Inchon airport, or deliver a Weapon of Mass Destruction.

As much as allied air forces would like to, they would be unable to ignore the potential threat of the NKAF and would have to wage the same counter-air campaign they waged in Iraq, at the expense of supporting allied ground troops.

Seoul is crazy close to the border

A defense in depth against a North Korean attack would probably count on a defensive zone of 50 miles. Seoul itself is less than 35 miles from the Demilitarized Zone, making a forward-defense strategy necessary. Forward-defense strategies are typically less successful than defense-in-depth. Every bit of ground lost by the allies will hurt.

Turning Seoul into a ‘sea of fire’ is a bad idea

Since the mid-’90s the North has threatened to turn the South Korean capital into a “sea of fire,” killing thousands or even millions in a merciless, concentrated artillery barrage. A North Korean player of this game may ask himself: why bother?

Raining artillery down on Seoul without an all-out ground assault is a dead end, because it would achieve nothing but guarantee the utter destruction of the Kim regime in a massive allied retaliation. Leveling Seoul would be an act of regime suicide. And as Korea-watchers will tell you, the entire North Korean state exists to ensure the survival of the Kim dynasty.

If the North does commit to war, it must seize hostages — cities, particularly Seoul — quickly or face defeat. It needs Seoul as a bargaining chip, and in more or less one piece. Using artillery to support an invasion is much more compelling than killing South Korean citizens for no particular benefit.

The longer it takes the North to win, the more likely it will lose

Pyongyang has few friends or allies — certainly none that would join in an invasion of the South. For the North, there is no help coming. On the other hand, South Korea would see waves of American and possibly other Western troops bolstering its defenses.

There is a long list of perfectly plausible in-game reinforcements from allied countries — everything from the U.S. 1st Marine Division to the Australian Defence Force. It is important that the North launch a lightning attack with little or no strategic warning, in order to seize as much terrain as possible. Because the moment the war starts, North Korea’s numerical advantage starts slipping away.

The North Korean bomb is impractical in an invasion scenario

North Korean nuclear weapons, which as far as anyone knows are not weaponized and cannot fit on the tip of a missile or an aircraft bomb, would have a very limited role. Without a delivery system a North Korean nuke cannot be used offensively. The game does model one scenario using the North’s nukes: destroying the port city of Busan presumably by smuggling a device into the city.

Taking out Busan, a major hub for allied reinforcements, would slow the allied war effort — but it would be looked upon extremely harshly and would guarantee destruction of the Kim regime.

South Korea’s expensive, new blue-water navy is not at all helpful

The Republic of Korea Navy has gotten an injection of brand-new ships over the last 10 years, including destroyers and amphibious ships. This has allowed South Korea to participate in, for example, counter-piracy missions off the coast of Somalia.

However, these ships have no role in repulsing an invasion by the North. Pyongyang’s small navy is antiquated and can be easily defeated by the South’s corvettes and frigates. There is no real job for an Aegis destroyer such as the Sejong the Great-class destroyers — unlike their American and Japanese counterparts, it can’t even shoot down ballistic missiles.

Nor is there much utility in an amphibious ship such as the South’s Dokdo, which can lift a mere battalion of 700 troops against a Northern land army of more than 7,000,000. One can’t help but wonder if money spent on the South Korean navy would have been better spent on the army.

The next Korean war doesn’t need stealth fighters, unless …

Although Next War: Korea does include the U.S. F-22 and F-35 stealth fighters, the game makes it pretty clear that they’re not necessary fighting North Korea. Older fighters such as the F-15 and F-16, armed with standoff weapons, would do just fine.

But the game includes air units from Russia and China as possible reinforcements of the Northern war effort, which prompts the question: if either country intervened on behalf of Pyongyang, how would that alter the air equation? The introduction of modern Chinese Su-27 fighters and Russian Su-34 fighter-bombers would make the skies much more dangerous, perhaps requiring the U.S. to counter with F-22s and F-35s.

Hopefully we’ll never find out whether these lessons are valid. Are we planning to fight the right war in Korea? Will the next Korean conflict be a re-fight of the first war, or a massive humanitarian disaster and insurgency? Looking for answers in unconventional places like a game is good for us.

Not to mention fun.

Image: The apparent launching of projectiles that, according to military officials in Japan and South Korea, landed in the sea between the Korean Peninsula and Japan, is seen in this undated picture released by North Korea's Central News Agency (KCNA) on October 31, 2019. KCNA via REUTERS