I Tried To Become a U.S. Military Sniper. I So Failed. 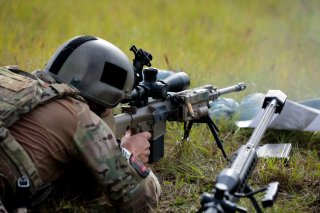 Here's What You Need to Remember: Barrett is now under contract to deliver M107A1 .50-Cal Long Range Sniper Rifle systems to the US Army in an $8 million deal which includes scopes, suppressors and square parts kits.

(Kingman, Ariz.) My shoulder was pressed firmly against the end or “stock” of the rifle, my index finger extended horizontally just above the trigger as I lay flat on the ground and tried to align my right eye directly through the targeting sight -- all as I for the very first time, tried to fire a US military M107A1 sniper rifle at a small target roughly 200 yards away.

While being closely coached by an expert sniper from Barrett, the gun’s maker, I attempted to align my eye directly through the scope in a direct, linear fashion. I found that if my view shifted ever so slightly from one side to the other, I lost the target picture and saw only black. This, I understand, is a technical design set up to deliberately ensure the person looking through the scope can only see if he or she is exactly aligned with a straight-ahead view at the target.

Then, while being instructed by the expert, I struggled to line up what looked like a thin black cross targeting line, or “reticle” through the scope - with a small blue target circle hidden between bushes in a desert firing range about 200-yards away. The targeting scope itself, shows what looks like a narrowly configured, intensely magnified picture of a circular area of terrain ahead, with a “reticle” crossing straight through the eye view. The intent, as I understood, is to precisely align the center of the cross with the intended target and pull the trigger -- to achieve precision destruction. Snipers rotate a small circular device attached to the weapon's sight - and "click" one way or another - as it is called - to align the crosshairs with the target and adjust the reticle for wind, range or elevation changes.

The desert firing area was set up as part of a massive live-fire weapons demonstration in rural Northwestern Arizona - called the Bushmaster User Conference 2019, sponsored by Bushmaster cannon-maker Northrop Grumman. The sniper rifles were a small part of a large collection of weapons including emerging 50mm cannons, lightweight 30mm cannons and other weapons, many of them mounted onto armored combat vehicles.

As for the sniper rifle, it was nearly five-feet long at “57 inches, with a cylinder-like suppressor at the end and a weight of about 28-pounds. Barrett is now under contract to deliver M107A1 .50-Cal Long Range Sniper Rifle systems to the US Army in an $8 million deal which includes scopes, suppressors and square parts kits. Barrett information on the gun specifies as having a "lightweight aluminum upper receiver with integral optics" Barrett data further describes the weapon as having a "barrel with fully chrome-lined chamber and bore, 10-round steel magazine with cartridge witness indicators and anti-corrosive coating."

My expert sniper coach was Bryan James, Senior Vice President of Sales, Barrett; he told me to lay flat, spread my legs apart, widen my elbows and firmly press the stock against my shoulder to steady the shot and prepare for a “jolt” or recoil after the weapon fires.

Before I tried a shot, I first looked through the Spotter’s Scope, a magnified view of the target area with numbers around what looked like a black semi-circle to account for a variety of interwoven key factors -- such as wind speed, location, angle and other variables likely to impact the accuracy of the shot. Then, I was ready to fire.

While unknown to me as I attempted my first ever sniper shot, the Barrett M107A1 is considered a large sniper rifle which fires a .50-cal bullet. The larger bullet can of course destroy an individual enemy fighter, yet the .50-cal sniper bullet is primarily designed to destroy or disable thin skinned enemy vehicles and small structures or fortifications. As one former Army weapons expert explained it to me, the M107A1 is the kind of weapon which could be used to hit, destroy or disable the engine of an enemy vehicle.

Just before taking off the safety, arming the rifle and moving my finger down onto the trigger, I worked to move the reticle right on the target. I saw that the crosshairs were a little below the target, so I tried to lift up the barrel of the gun to squarely place the center of the cross right on the “blue circle” target in the desert bushes. The blue circle target was lodged on the upward slope of what looked like a large valley, making it difficult to know what was precisely level or straight across from the hill where I was taking aim.

After struggling to slowly pull the shot up just a little, I tried to stay as steady as possible - and pulled the trigger. In what seemed like an instant, or milliseconds, the stock of the gun slammed back into my shoulder and I saw smoke in the bushes a few football fields away. While I heard the round exit the weapon, I must say the firing was actually not very loud at all -- thus the impact of the suppressor.

A bit stunned, I lifted my head back from the rifle and had absolutely no idea if I had hit anything - let alone the target. At that moment, Bryan told me I had blasted a hole right through the center of the target. Exact hit! My one and only first sniper rifle shot of all time. I was delighted and very impressed with my coach.I decided I would not make another attempt, so as to retain a perfect (if very lucky and well coached) record.

However, before I praise myself too profusely, there are several factors to consider. First and foremost, the Barrett M107A1 -- a famous sniper rifle used regularly by the US military -- can hit ranges with great precision out to 2,000 meters. My hit was only 200 yards. Hardly any comparison. Furthermore, from what I understand, longer shots require a much greater degree of adjustment when it comes to difficult, fast changing factors such as wind speed, target movement, range and even a need to factor in the rotation of the earth in some cases.

After hitting what any actual sniper would consider an easy shot, I left the scene with a vastly increased appreciation for the expertise, focus and dedication necessary to perform high-level wartime sniper missions. Not only do trained snipers hit targets precisely at nearly 10-times the distance of my shot, but they track and destroy moving targets as well -- all while not giving away their position. I came to more fully understand why many regard a sniper's mission as requiring physical, mathematical and mental excellence.

Osborn previously served at the Pentagon as a Highly Qualified Expert with the Office of the Assistant Secretary of the Army - Acquisition, Logistics & Technology. Osborn has also worked as an anchor and on-air military specialist at national TV networks. He has a Masters in Comparative Literature from Columbia University. This article first appeared in April 2019.