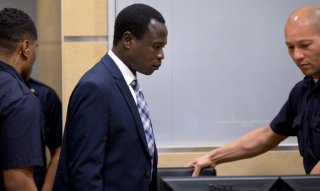 The conviction of Dominic Ongwen, a former commander in the Ugandan rebel group the Lord’s Resistance Army (LRA), at the International Criminal Court (ICC) for an array of crimes against humanity has raised important questions about guilt and victimhood among former child soldiers. Ongwen was found guilty on February 4 of 61 of the 70 charges laid against him, including the ICC’s first-ever successful prosecution for “forced pregnancy”.

Charges against him related to attacks on civilian populations in four camps for internally displaced people in northern Uganda between 2002 and 2005 during the vicious two-decade war between the LRA and the Ugandan army. Besides forced pregnancy, other charges included murder and sexual and gender-based crimes, including rape, sexual slavery and forced marriage. He was also convicted for conscripting children under the age of 15 into the LRA.

Ongwen’s experience as a former child soldier, having been forcibly abducted on his way to school at the age of ten by the LRA under the supreme command of Joseph Kony was a central theme in his defence.

But while the court was conscious of the psychological trauma suffered by child soldiers, Ongwen’s experience as a child was not a factor in the decision. In her opening statement when the trial began in 2016, ICC prosecutor Fatou Bensouda said:

The evidence of many of the child victims in this case could be, in other circumstances, the story of the accused himself … But having suffered victimisation in the past is not a justification, nor an excuse to victimise others.

Ongwen’s own abduction and the brutality and coercion he undoubtedly suffered at the hands of the LRA as a child may be considered as mitigating circumstances during the sentencing phase of the trial, expected to take place in March or April 2021.

There is a developing body of case law at the ICC concerning crimes of sexual and gender-based violence (SGBV). The Statute of Rome defines SGBV as those crimes committed against persons – whether male or female – because of their sex or socially constructed gender roles. These are not necessarily manifested as sexual violence, but can include rape, sexual slavery, enforced prostitution, forced pregnancy and enforced sterilisation.

According to the ICC, the Rome Statute is “the first international treaty to establish conflict-related SGBV as crimes against humanity, war crimes and, in some instances, genocide. These groundbreaking provisions have provided a new language to describe and prosecute these heinous crimes.”

The first ICC trial of a militia leader for SGBV crimes was that of Jean-Pierre Bemba Gombo, who was found guilty in 2016 of five counts of murder, rape and pillaging, amounting to war crimes and crimes against humanity.

He was also found guilty of failing to stop troops under his command of committing similar crimes, also the first time that the concept of command responsibility was used by the ICC. The unique element in Bemba’s case was the recognition by the ICC of rape as a weapon of war.

But Ongwen’s trial was the first time the court considered the offences of forced pregnancy and marriage specifically as war crimes. Large numbers of women and girls were abducted to serve as “bush wives” of senior members of Ongwen’s Sinia Brigade. The court acknowledged the complex physical and psychological effects of such enforced sexual servitude on both the victims and their children.

Ongwen’s lawyers plan to appeal the decision on all the charges. But if the verdict is upheld at appeal, victims may receive compensation from the ICC’s Trust Fund for Victims. These could include both individual compensation and collective reparations awards in the shape of rehabilitation as well as educational and housing assistance.

As one study conducted in northern Uganda reveals, reparations are doubly important because of the stigmatisation faced by the victims of sexual crimes which can affect their prospects of employment or marriage in later life.

It is also important that the Ugandan government, as a matter of urgency, investigates allegations of similar war crimes committed by government troops. As early as 2005, Human Rights Watch established that soldiers in Uganda’s national army had raped, beaten, arbitrarily detained and killed civilians in camps. Thus far, none have been brought to justice.