ICE Is Fighting a Losing Battle Against Illegal Immigrants: Last Year's Raids In Mississippi Show It 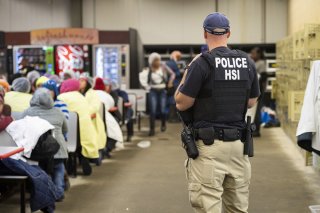 Immigration and Customs Enforcement (ICE) raided seven poultry plants in August 2019 and detained over 680 people on suspicion that they were illegal immigrant workers. ICE eventually released 300 of them and prosecuted or removed the rest. Recently, ICE announced that it was charging four employees of the poultry firms on several charges related to illegal employment, employment‐​related identity theft, harboring illegal immigrants, and other crimes. The Mississippi raids took an entire year to produce indictments against employers. This is evidence that work‐​site immigration enforcement is an impossibly expensive and laborious mess that should be abandoned.

Immigration restrictionists are cheering the indictments as a sign that the government is finally getting serious. One wrote, “mandatory E‐​Verify, backed by routine audits and stiff penalties for non‐​compliance” is the single most important way to guarantee that illegal employment vanishes. E‐​Verify has been mandatory in Mississippi for all new hires since July 2011 and the system didn’t prevent the hiring of hundreds of illegal immigrants nor is there any indication that it helped with the investigation. If E‐​Verify was the silver‐​bullet system that its proponents claim, then the ICE raids in Mississippi wouldn’t have been necessary in the first place.

Furthermore, an indictment that took a year after the first arrest to file is not a scalable system as this was a time‐​intensive process for federal prosecutors to file four measly indictments out of seven raided plants. The feds couldn’t even indict one person at each plant. Perhaps the prosecutors are seeking to tap the insights of Gary Becker’s crime model to scare potential violators of employment‐​related immigration law into compliance, which could explain the long potential sentences if they’re convicted, but increasing the probability of arrest is more important for deterring crime in the future. Since this type of prosecution isn’t scalable, prosecutors are not going to much increase the probability of being caught. This means they will rely on the deterrence effect of great punishments, which aren’t as effective as a high rate of discovery and prosecution.

Perhaps prosecutors are seeking to spook human resources departments sectors of the economy in certain regions of the country. That’s a game of whack‐​a‐​mole that won’t ever end. Hilariously, some restrictionists are comparing this strategy to how the government attempts to enforce drug prohibition. As Mark Krikorian wrote:

But by arresting and charging the illegals themselves, prosecutors gain leverage, and are able to offer leniency if the illegal workers rat out their managers. It’s similar to going after a narcotics organization — you want to get the dealers off the street, of course, but you also want to work your way up the chain.

The raids in Mississippi have revealed several uncomfortable facts for immigration restrictionists:

Immigration restrictionists could take this inconvenient reality and develop new enforcement strategies, but I doubt it. Their fallback strategy for the last 5 years is a 10,000-year-old technology so I doubt they’ll be interested in really examining the incentives of illegal immigrants, American employers, and how to change them in the cheapest way possible. My recommendation: increase the opportunity cost of illegal immigration by increasing legal immigration.

This article by Alex Nowrasteh first appeared in CATO on August 12, 2020.