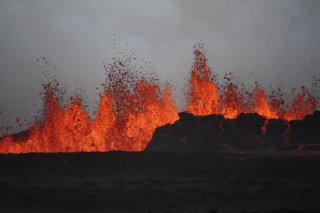 Understandably, any mention of another explosive eruption from an Icelandic volcano will raise concerns in the air travel industry, which is currently reeling from the COVID-19 pandemic. But there are clear signs that the Grímsvötn volcano is getting ready to erupt again. As a result, the authorities have recently raised the threat level for this volcano.

Grímsvötn is a peculiar volcano, as it lies almost wholly beneath ice, and the only permanently visible part is an old ridge on its south side which forms the edge of a large crater (a caldera). And it is along the base of this ridge, under the ice, that most recent eruptions have occurred.

Another peculiarity is that the heat output from the volcano is extraordinarily high (2000-4000MW), and this melts the overlying ice and produces a hidden subglacial lake of meltwater. This is up to 100 metres deep and has ice up to about 260 metres thick floating on it. Fresh ice is continually flowing into the caldera, where it melts, and so the water level just keeps rising and rising.

This meltwater can escape suddenly, and after travelling southwards beneath the ice for about 45km it emerges at the ice margin as a flood, which in the past has washed away roads and bridges. Fortunately, the passage of meltwater beneath the ice to its outlet can be tracked, and so roads are closed in good time to avoid travellers getting caught in the flood and killed.

Yet another important peculiarity of Grímsvötn is that it can have a hair-trigger response to pressure. This happens when the meltwater lake drains – removal of the water from across the top of the volcano rapidly reduces the pressure. This can trigger an eruption – it’s like lifting the lid off a pressure cooker. This has happened many times at Grímsvötn.

Grímsvötn is Iceland’s most frequently erupting volcano, and over the past 800 years some 65 eruptions are known with some certainty. The time gaps between eruptions are variable – and, for example, prior to the larger 2011 eruption there were smaller eruptions in 2004, 1998 and 1983 with gaps of between four and 15 years. Crucially, and with the next eruption in mind, Grímsvötn appears to have a pattern of infrequent larger eruptions that occur every 150-200 years (for example 2011, 1873, 1619), with smaller and more frequent eruptions occurring roughly once a decade in between.

A high frequency of eruptions at a volcano allows scientists to detect patterns that lead to eruptions (precursors). And if these are repeated each time a volcano erupts then it becomes possible for scientists to be more confident that an eruption is likely to happen in the near future. It is, however, seldom possible to be precise about the exact day.

Icelandic scientists have been carefully monitoring Grímsvötn since its 2011 eruption, and have seen various signals that suggest the volcano is getting ready to erupt. For example, the volcano has been inflating as new magma moves into the plumbing system beneath it (think of burying a balloon in the sand and then inflating it). Increasing thermal activity has been melting more ice and there has also been a recent increase in earthquake activity.

So what happens next? Again, based on the pattern observed at past eruptions, an intense swarm of earthquakes lasting a few hours (one to ten hours) will signal that magma is moving towards the surface and that an eruption is imminent. In cases where the hidden subglacial lake drains and triggers the eruption, the earthquakes occur after the lake has drained and just before the eruption.

The smaller Grímsvötn eruptions expend a lot of energy when they interact with water and ice at the surface. That means the resulting ash gets wet and sticky and so falls from the sky relatively quickly. Ash clouds therefore only travel a few tens of kilometres from the eruption site. This is a good scenario for Icelanders and also for air travel, as it prevents the formation of substantial ash clouds that could drift around and close off airspace.

But will it be a small eruption? If Grímsvötn’s past pattern of occasional large eruptions with more numerous smaller eruptions occurring in between continues into the future, then the next eruption should be a small one (given there was a large one in 2011). And the word “should” is important here – Iceland’s volcanoes are complex natural systems and patterns are not always followed faithfully.