The Iconic Walther P99 As: A Gun That Police Love to Love 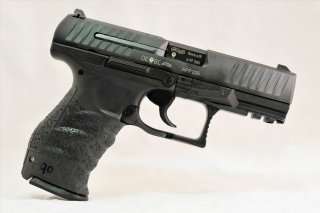 Here's What You Need To Remember: The Walther P99 AS is one of Walther’s most iconic pistols, trusted worldwide by law enforcement professionals. This innovative handgun is universally adored.

Walther’s pistols are known for being accurate, and the P99 is no exception. I’d even say as far as accuracy goes, it’s the best of its kind. Walther’s quick-action trigger system definitely contributes a great deal to the accuracy, and from ten yards, I was able to maintain an average ten-shot grouping of less than 2”! From twenty-five yards, my average grouping was just around 4.” For a subcompact, iron-sighted pistol, I really couldn’t ask for anything more.

The P99 is trusted by law enforcement professionals worldwide, so it’s no surprise to me that I’ve found this pistol to be completely reliable. Over the approximately 300 rounds I’ve shot with it, I’ve had zero malfunctions and zero failures to feed, no matter what environmental conditions it was exposed to. This pistol has stood up to mud, rain, snow, sand, and countless other elements with no problems to speak of. It’ll feed any ammo you load it with, and the operation is flawless.

For such a dated design, this pistol still holds up pretty well. The grip is pretty smooth compared to a lot of the pistol grips on the market today, which could be a pro or con depending on who you ask. A lot of people these days like more aggressive grip texture and find a smoother one hard to hold, but the small, smooth grip is good if you’re looking to use the P99 for concealed carry. The grip angle is 110 degrees, and it comes with three interchangeable backstraps (small, medium, and large) to adapt to shooters of all different sizes. The trigger guard is pretty roomy, which is a plus if you like to wear gloves while shooting. Both the front and rear sights are plain polymer white dot sights, which is pretty standard. The rear sight is adjustable for windage and the front sight is adjustable for height, but you might want to change these out if you’re planning to use the pistol for serious shooting. You’re in luck if you’re one for aftermarket optics, because it does include an accessory rail to accommodate lights, lasers, etc. Takedown is easy, making cleaning a breeze. The takedown latch and slide release both sit flat against the frame (another plus for concealed carry), you just pull the slide back slightly, pull down the takedown catch on each side of the frame, and remove the slide.

The trigger, in my opinion, is what makes the P99 worth buying. It’s a double-action/single-action stageable, anti-stress (that’s the “AS” in P99 AS) trigger with an extremely short reset, noted by an audible “click.” What’s “anti-stress?” The first shot in single-action has a “two-stage” pull, so it takes the full length of a double-action shot. The first pull is long, but the following single-action shots all have a much shorter pull. This comes from the pistol’s intended purpose as a duty gun, and is a nice feature, but does take a little getting used to. Follow-up shots are quick and easy, and there’s no overtravel to speak of. The single-action pull is 4.5 lbs, while the double-action pull is 9 lbs.

Standard capacity on the P99 used to be just ten rounds, but they’ve upped it to fifteen rounds. There are also +2 round magazines available, but these protrude from the gun a little bit. It comes with two mags in the box, and the ambidextrous paddle-style release is easy to use with your pointer finger or thumb while still keeping your grip on the pistol. Since the release is so simple to use, reloading is very easy as well. While the release is ambidextrous, the decocker and slide release are right-handed. The decocker is on top of the slide, which is kind of an awkward position but not too difficult to work with.

The overall length of the P99 is just over 7,” with the barrel accounting for 4.” Unloaded, it weighs 24 oz, which is a bit heavier than most people would expect. It’s not a lightweight pistol and feels heavier than it looks, so don’t be surprised that this tiny pistol has some weight behind it!

Recoil management has some pros and cons. At first, the amount of recoil that comes from this pistol seems excessive, but it does calm down with continued use. It doesn’t flip as much as you’d think, and it’s pretty easy to get accurate follow-up shots. The recoil spring system is based on Glock’s, but the stout, captive system causes the slide to be stiffer than you would expect from a 9mm handgun. The grip, again, is not great for recoil. The area where the web of your hand rests is rounded, and something flatter with more texturing would definitely be easier on the wrist. However, it does still handle even heavy recoiling loads well.

The MSRP for the P99 is $629, but you can find them from many online retailers for around $550. It’s a pretty mid-priced pistol, comparable to similar ones you can find elsewhere.