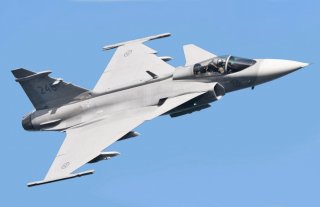 The aircraft that emerged was a single-engine, single-seat, canard design powered by a Volvo-Flygmotor RM12—a derivative of the F/A-18’s General Electric F404-GE-400. It’s a myth that Sweden developed the Gripen entirely on its own, a lot of the technologies like the engine, were outsourced to keep costs down. (Indeed, the use of British components scuttled a potential deal with Argentina)​.

The JAS-39 is an excellent low-cost fourth-generation fighter. Originally developed in Sweden the 1980s—part of the that nation’s efforts at maintaining a neutral foreign policy stance—the Nordic machine is designed to be relatively cheap, easy to maintain and fight off any potential aggressor.

Those traits have made the Gripen an attractive prospect for many nations including Brazil, South Africa, Czech Republic, Hungary and Thailand. More countries—deterred by the outrageous price tags of rival machines—are likely to jump onboard the Gripen bandwagon as more advanced derivatives of the Swedish jet enter production. Croatia, Finland and Bulgaria are but a few possibilities as they begin to look for replacements for aging hardware.

Sweden started developing the Gripen in 1979 as a replacement for its J-35 Draken and JA-37 Viggen fighters. The basic requirement was a Mach 2.0-class fighter with good short-field performance. Sweden expected to disperse its aircraft in case of an invasion, which meant that the aircraft had to be able to operate from 2,600ft by 30ft strips. The jets also had be serviceable away from the comforts of a proper airbase since the most likely operating areas were going to be highways.

With the Gripen NG soon to be delivered to the Swedish and Brazilian air forces, the JAS-39 will undoubtedly remain a competitor in a multitude of markets around the globe. The Gripen production line is backed up to 2022, but Saab officials have suggested they could sell upgraded versions of the older airframes that are in storage. Saab told reporters at the Paris air show earlier in the year that it might be able to sell between 300 and 450 jets over the next two decades.