Is the Impeachment of Donald Trump Constitutional? 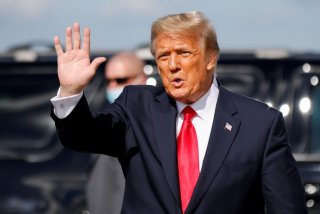 Former judge Michael Luttig has argued correctly that the Constitution refers to impeachment of the president, not the ex‐​president. Article II, section 4 provides that “The President … shall be removed from Office on Impeachment for, and Conviction of, Treason, Bribery, or other high Crimes and Misdemeanors.” Accordingly, once a person is no longer president, he can’t be impeached or convicted. Our federal government has only those powers enumerated in the Constitution; it does not have the power to impeach a former president.

On the other hand, several legal experts have pointed to Article I, section 3, where the Constitution states that “Judgment in Cases of Impeachment shall not extend further than to removal from Office, and disqualification to hold and enjoy any Office of honor, Trust or Profit under the United States.” Those experts note further that disqualification is a separate vote — requiring only a majority of the Senate, not the two‐​thirds required for conviction and removal. Accordingly, the disqualification vote could occur after the president had already been removed.

Ergo, the entirety of the impeachment process, expanded to include disqualification, could apply to an ex‐​president. Can those two provisions be reconciled? First, nothing in the Constitution requires that conviction and removal occur simultaneously. The Senate could certainly vote to convict while declaring that removal would occur on a specified future date. Then, between the date of conviction and the date of removal, the Senate could decide whether to disqualify the president from holding future office, in which case the three‐​stage process – impeachment, conviction, disqualification – would be complete prior to removal. None of the stages would affect an ex‐​president, thereby complying with both of the Articles cited above.

Second, the two Articles can be reconciled even if the disqualification vote occurs post‐​removal. Article II expressly refers to impeachment and conviction of “The President.” By contrast, Article I refers to disqualification, but limits that remedy to someone who is subject to “Judgment in Cases of Impeachment,” which could include an ex‐​president. Therefore, if the president is impeached and convicted in accordance with Article II, he might subsequently – post‐​removal, as an ex‐​president – be disqualified in accordance with Article I.

Of course, the president could avoid removal and disqualification if he resigned prior to conviction. In that event, if he had committed a crime, he might still be indicted after leaving office. And the voters might determine that his behavior disqualified him from future office.

Here are my conclusions: (1) Per Article II, President Trump was vulnerable to impeachment and conviction while in office. (2) Per Article II, he is not subject to impeachment and conviction post‐​presidency. (3) Per Article I, if he had been impeached and convicted while in office, ex‐​President Trump would still be at risk of disqualification. As we know, Trump was impeached but not convicted. In my view, he may not now be constitutionally convicted or disqualified. Yes, in 1876 the Secretary of War was impeached after he had resigned; but that act was never challenged in court and consequently does not establish legal precedent. After all, Congress has done many things that are unconstitutional.

Suppose Trump is unconstitutionally convicted? What redress is available? The Supreme Court might be reluctant to get involved because impeachment is a political question explicitly assigned by the Constitution to the legislative branch. Perhaps, however, while not inclined to rule on matters that arise during an impeachment, the Court would nonetheless be willing to address the threshold question of what counts as a legitimate impeachment. Otherwise, if Trump were once again to become a presidential candidate, despite the Senate’s vote to disqualify him, the Court might then opine on litigation initiated by one or more of his would‐​be opponents.