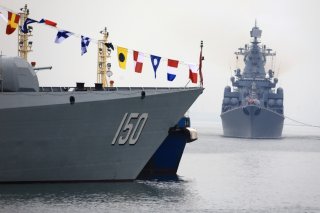 Here's What You Need to Remember: For now, Beijing has avoided the military entanglements that have snared Washington and Moscow. But if it ever does choose to send the most forceful of signals, a warship armed with land-attack cruise missiles would be a powerful tool.

That puts China in a select club. The Tomahawk land-attack cruise missile has been a favorite tool of U.S. foreign policy and warfighting for 30 years, fired at everything from military bases in Iraq and Syria, to a failed 1998 attempt to kill Osama Bin Laden at his Afghan lair. Russia also has used them: in 2015, Russia fired Kalibr cruise missiles at Syrian rebels from warships stationed a thousand miles away in the Caspian Sea, in a demonstration of the long arm of the Kremlin.

Now, China has the option of using them to flex its muscles. Chinese media offered few details about the Chinese missiles, other than to say that that the Type 055 class – the People’s Liberation Army Navy’s newest destroyers – are capable of launching them. The first Type 055, the Nanchang, was launched in January 2020.

The Type 055 is set to become something of a nautical bogeyman for Western and Asian navies. China calls them destroyers, but the U.S. Defense Intelligence Agency’s 2019 report on Chinese military strength describes them as guided missile cruisers. At 10,000 to 12,000 tons, and 590 feet long, they are actually slightly bigger than American Ticonderoga-class cruisers.

They are also armed to the teeth, with primary firepower coming from 112 vertical launch system (VLS) tubes that can launch a variety of weapons, including HHQ-9 surface-to air-missiles, YJ-18 anti-ship missiles and YU-8 rocket-propelled anti-submarine torpedoes. Chinese media did not identify the land-attack missile, but a likely candidate is a navalized variant of the CJ-10 land-based cruise missile.

The CJ-10 (also known as the DH-10) is a subsonic missile with an estimated range of 1,500 to 2,000 kilometers (932 to 1,242 miles). It uses multiple guidance systems, including inertial navigation, GPS, and terrain-matching radar.

The 2049 Institute, a U.S. thinktank, also believes that the weapon borrows heavily from foreign technology, including a Russian turbofan engine and U.S. Tomahawk missiles.

“The DH-10 is based largely on U.S. Tomahawk cruise missile technologies obtained by aggressive PLA buyers in Iraq, Serbia and Afghanistan and elsewhere U.S. Tomahawks, or parts thereof, have been lost,” said a Project 2049 report.

In any event, there are lots of Type 055s on the way. “China has launched four Type 055 guided-missile destroyers in the past 13 months — two simultaneously in July — and is building four more,” noted the South China Morning Post in August 2018. “The home-built warships — which analysts have called the second most powerful globally — are to serve as the primary escorts for People’s Liberation Army aircraft carrier strike groups.”

That China has the capability and experience to develop a land-attack cruise missile is undoubted. The Chinese military already fields ICBMs, a variety of ballistic missiles, and is developing hypersonic weapons.

The more significant question is whether the capability for Chinese warships to launch cruise missiles at targets a thousand miles away, will tempt Beijing to use them. The U.S. has probably fired thousands of Tomahawks since the 1990s, and it would not be a surprise if Russia used them more frequently in places like Syria.

For now, Beijing has avoided the military entanglements that have snared Washington and Moscow. But if it ever does choose to send the most forceful of signals, a warship armed with land-attack cruise missiles would be a powerful tool.