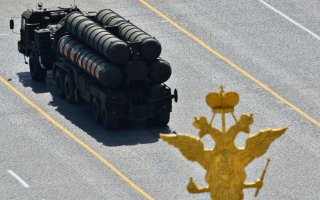 The Russian-built S-400 Triumf anti-missile platform created a major fracture between Turkey and its NATO partners, including the United States. Now the question is whether the surface-to-air system will stir up trouble between the United States and India as the latter has reaffirmed its commitment to the S-400 deal with Moscow.

Russia and India have long been partners if not exactly allies, and New Delhi has been a customer of Moscow's since the Soviet era.

In April India even requested that Russia expedite the delivery of the Triumf. The two nations had already signed a $5.43 billion contract for the S-400 Triumf "SA-21Growler," a long-range surface-to-air missile (SAM) system, which would include a total of five regimental kits. The S-400 can utilize four different types of missiles with ranges between 40 kilometers, 100 kilometers, 200 kilometers and 400 kilometers, and it can be used to detect and destroy high and low targets. A team from the Indian Air Force had already been deployed to Moscow to undergo training to operate the system as soon as it arrives.

A sticking point has been the Trump administration's introduction of the 2017 Countering America's Adversaries Through Sanctions Act (CAATSA), which would bar Russia from exporting the system to India. However, New Delhi has countered that the process to buy the platform began before CAATSA was imposed, while the Indian government has further argued that it is not a United Nations law.

Just this week Russian Foreign Minister Sergey Lavrov stressed that there have been no alternations in Russia's contracts with India on the deliveries of the S-400.

"Let me note the implementation of the contracts on the delivery of S-400 systems to India. Here we see no changes and the Indian leadership reaffirms its commitment to these accords," Tass reported Russia's top diplomat as telling reporters, following the results of a meeting of foreign ministers from the BRICS association (Brazil, Russia, India, China and South Africa) held via a video conference.

Lavrov also noted that the partnership between Moscow and New Delhi goes beyond just the S-400. He told reporters that Russia and India are consistently developing cooperation in the economic, political, humanitarian, military-technical, and healthcare spheres in compliance with the accords reached at the highest level.

New Delhi had announced its intention to purchase Russian-made S-400 air defense systems back in 2015 – two years before the CAATSA. The $5.43 billion contract for the delivery of five regiment sets of S-400 anti-aircraft missile systems was signed in October 2018 during Russian Federation President Vladimir Putin's visit to India.

However, there have been warnings from U.S. lawmakers to New Delhi on the issue of the S-400.

"If India chooses to go forward with its purchase of the S-400, that act will clearly constitute a significant, and therefore sanctionable, transaction with the Russian defense sector under Section 231 of CAATSA," warned Senator Bob Menendez (D-N.J.), chair of the U.S. Senate Foreign Relations Committee.

However, given that New Delhi faces threats from both Pakistan and China, it may opt to move ahead with the S-400 and ask forgiveness from Washington later.