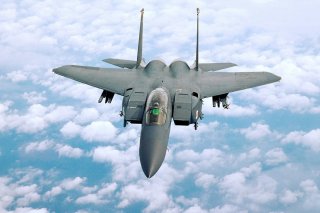 Here's What You Need To Remember: The strength of any country is measured by the deterrent capacity of the air force which is manifested in the quality of fighters. The F-15EX has a potent deterrent capability as compared to its smaller cousin the F-35. Heavy fighters are deployed for strategic effect while fighters like the F-35 usually have a restricted role and fit in the naval aviation framework. The enemy may engage the smaller F-35 but will hesitate before deploying fighters against the more potent F-15EX.

India has been strengthening its defense relations with the United States to address shared strategic interests in the APAC region by purchasing a number of U.S. weapon systems. In the build up to President Donald Trump’s visit to India, the Indian government has cleared the $2 billion deal to acquire twenty-four MH-60 naval multirole helicopters. The United States has also issued the LOA for the National Advanced Surface-to-Air Missile System (NASAMS) missile shield system to protect New Delhi.

The Indian multi-role fighter acquisition program sees another contender in the F-15EX manufactured by Boeing. Ahead of Trump’s visit to India, Boeing has announced that it will offer the F-15EX to the country. The F-15 is a legacy fighter manufactured in 1972 while the F-35 is a modern fifteen generation fighter. While the F-15 EX is a heavy upgraded air superiority fighter with enhanced weapons payload capacity and advanced avionics, the F-35 is VTOL fighter which can operate from aircraft carriers, helipads, and unpaved runways. The two fighters differ in the mission, roles, specifications, functions, and structural designs.

The F-35 is a VTOL aircraft, a command and control aircraft, and an ISR platform which feeds the pilot with information and options to prioritize the targets. The F-35 is packed with stealth characteristics and sensor fusion. It has a speed of Mach 1.6 and a range of 670 miles. Due to its small size, the F-35 cannot accommodate heavy radars and fuel as compared to F-15EX. Its combat role is further restricted, as it can carry eight missiles and is unable to carry heavy bombs to destroy strategic targets and enemy infrastructure.

The F-15EX resembles the Su-30 MKI in terms of its size. It has a speed of Mach 2.5 and a combat range of 1,100 miles. Due to its size and specifications, the F-15EX fulfills a variety of roles like air superiority, interceptor, deep penetration strikes against enemy infrastructure, strategic bombing, and ground attack. It can carry weapons like the ASAT, JASSM-ER, GBU-28 Bunker Buster laser-guided bomb, hypersonic cruise missiles, and AGM-84H SLAM ER. It can carry twenty-two air-to-air missiles and other heavy weapons, which is far more than the F-35’s payload capacity. In fact, it carries more firepower than any other fighter aircraft in the U.S. Air Force inventory. In the future it may carry cluster bombs armed with thousands of small attack drones, which have the capability to enter rooms at military bases and target individuals without any collateral damage.

The F-15 can be detected by S-400 missile system from a range of 215 miles, while that range is much lower for the F-35 which is 21 miles The survivability rate in a contested airspace for the F-15 EX is less than the F-35 in view of the modern air defense system. But even at 21 miles the F-35 is vulnerable because, unlike the Patriot systems, the S-400 system is geared towards targeting aircrafts and missiles both at higher and lower altitudes. The F-15EX lacks the stealth features of the F-35 but complete stealth has not yet been achieved as aircrafts at some possible distance will be visible to radars. In this scenario the F-35 may escape the intermediate range SAMs but will be engaged by short range missiles or point defense systems like MANPADs. A U.S. Air Force F-117 stealth aircraft was shot down by the Serbian military and recently the Iranians downed the stealth RQ-170 drone.

Historically, VTOL aircraft like the Harrier and its successor the F-35 have operated from bases close to the borders of their target areas or from aircraft carriers. They are not capable of deep penetration strikes in enemy territory. Rather they are deployed for cross border strikes, close proximity fights with enemy fighter aircrafts and destroying enemy ships while keeping the aircraft carriers at a safe distance. Deploying a costly fighter like the F-35 near the border will increase the risk from Pakistan Air Force (PAF). A preemptive strike by PAF will destroy a squadron of Indian Air Force (IAF) F-35s. The F-35 has its own unique characteristics which can be exploited in a tactical environment as it can be called in for close air support to the Army on battlefields. The F-35 can be deployed against tactical targets such as insurgents, terrorist bases and enemy convoys. Due to the F-35s limited range and VTOL capability they can be inducted by the Indian Navy (IN) and not to the IAF.

The F-15 family is battle tested in the Middle East. Today, Israel has deployed F-15 fighters for a possible strike against Iran, and six F-15s were used in Operation Opera where they provided air cover to the offensive F-16 to destroy the Iraqi nuclear reactor in Osirak. In 1985, six Israeli F-15Ds and two F-15Cs flew over 1,200 miles from their bases across the Mediterranean Sea to strike the PLO’s headquarters located on the coast of Tunis, Tunisia. The F-15s have given the Israeli Air Force air supremacy over the Middle East.

The IAF will be operating against China and Pakistan. IAF requires fighters which have a deep penetration strike capability, the ability to loiter in the air for long hours, heavily equipped with weapons systems and can carry conformal fuel tanks so that they don’t have to return to the air base for refueling. Apart from the SU 30 MKI this criteria is fulfilled by the F-15 EX. India, at present, does not require stealth fighters as the Pakistani air defenses are antiquated and porous. U.S. special forces from JSOC entered Pakistan undetected and assassinated Osama bin Laden. Indian fighter aircrafts penetrated Pakistan air defenses for a strike against terrorist camps at various locations without being challenged. Pakistan will not upgrade its existing air defense network as it allocates a major part of its budget for low intensity warfare with India. Russia will not sell the advanced S 400 missile systems to Pakistan. India has been Russia’s main customer as the IAF, IN, and Indian Army has been buying Russian weapon systems.

The strength of any country is measured by the deterrent capacity of the air force which is manifested in the quality of fighters. The F-15EX has a potent deterrent capability as compared to its smaller cousin the F-35. Heavy fighters are deployed for strategic effect while fighters like the F-35 usually have a restricted role and fit in the naval aviation framework. The enemy may engage the smaller F-35 but will hesitate before deploying fighters against the more potent F-15EX.

The F-15EX fulfills the requirements of the IAF as it can carry an array of weapon systems including BVR missiles. After the Balakot air strikes against the Pakistan terrorist camps the PAF had responded by dispatching a pack of fighters to attack Indian military infrastructure on the border. To counter the pack the IAF’s Mig-21s had to close in on the approaching PAF fighters for a hit. If the IAF had earlier inducted F-15EX it could have launched a BVR missile and would have successfully downed another PAF fighter thus deterring the PAF from launching any further attacks. The F-15EX can be deployed against the China and due to its heavy engine capacity as it can operate in the high altitudes of Himalayas. The SU 30 MKI are already deployed on the Chinese border in the Himalayas. The F-15EX can be launched from deep inside Indian territory from a protected base and can still strike deep inside Pakistan. It can also be configured to carry nuclear weapons. The F-35 cannot perform these roles due to its restricted capability.

There is a possibility that UAVs which are already conducting the roles and functions of an F-35 fighter may replace it. But the UAVs cannot replace heavy weight fighters such as the F-15EX. Air theorists through aviation history have stressed the importance of achieving air superiority as rapidly as possible. The F-35 with its limited role is unable to attain air supremacy. The F-15EX is an airspace dominance weapon system while the F-35 is an aircraft for tactical operations. The question is not which is a better system but rather what are the operational requirements of the IAF. While the F-35 is a born fifth generation aircraft the F-15EX has been upgraded to a fourth generation aircraft. Both cannot replace each other and are not in competition with each other. A close understanding of the roles and functions of both the aircraft brings us to the conclusion that each one is potent in its deployed environment. The F-35 does not fit in the strategic plans of the IAF as it has restricted specifications as compared to the F-15EX. While the F-15EX best suits the operational requirements of the IAF the F-35 best suits the framework of IN.