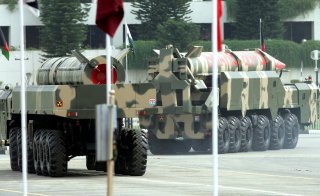 Here's What You Need to Remember: There are even questions about New Delhi rethinking its nuclear no-first-use doctrinePakistan’s nuclear doctrine remains purposely ambiguous, with the Pakistani military stating that Islamabad would not hesitate to use a tactical nuclear weapon to defend itself against a conventional Indian invasion.

India and Pakistan, two nuclear-armed rivals with one of the world’s oldest, unresolved territorial disputes, have fought three wars and numerous skirmishes. The two countries nearly went to war again in 1999 when Pakistani troops crossed the Line of Control into Kargil, an offensive that could have spiraled into a full-blown nuclear exchange were it not for firm crisis diplomacy led by President Bill Clinton and his national security adviser, Sandy Berger.

Because of the adversarial history, the intense regional competition, and nationalistic politics in both countries, there has always been a dark question hovering over the India-Pakistan relationship: what would happen if New Delhi and Islamabad used their nuclear weapons during a conflict?

Ten researchers across the United States gamed out scenarios in order to answer this exact question. Writing in the journal Science Advances, the researchers calculated that as many as 125 million people could perish on both sides of the India-Pakistan border.

The numbers are staggering, a result of two adversaries armed to the teeth with at least 280 nuclear warheads between them.The full study is full of scientific measurements that can be difficult for the layperson to understand, but the conclusion is anything but. An India-Pakistan nuclear war would make the world’s previous conflicts look like small battles. If both governments decided to aim those warheads at major population centers to exert maximum damage, the carnage could only be accurately described as a modern-day apocalypse.

“Because of the dense populations of cities in Pakistan and India...even a war with 15-kt weapons could lead to fatalities approximately equal to those worldwide in WWII,” the authors write. A war fought with 100-kt weapons could result “2.5 times as many as died worldwide in WWII and in this nuclear war, the fatalities could occur in a single week.”

And those are only the direct casualties that result from the weapons themselves. The environmental impact of a nuclear war between these South Asian neighbors would be just as devastating, with its consequences reaching far beyond the immediate region. Surface sunlight would decrease by 20%-25%, causing temperatures to decline by as much as 41 degrees. The temperature change would have massive global repercussions on the food supply, with a 15 to 30% hit on agriculture.

One would hope that the mere thought of losing tens of millions of people would deter India and Pakistan from even pondering a nuclear option. Unfortunately, that isn’t the case. There are even questions about New Delhi rethinking its nuclear no-first-use doctrinePakistan’s nuclear doctrine remains purposely ambiguous, with the Pakistani military stating that Islamabad would not hesitate to use a tactical nuclear weapon to defend itself against a conventional Indian invasion. ; in the International Security Journal earlier this year, M.I.T.’s Viping Narang and the University of Albany’s Christopher Clary write that “serious national security thinkers in India have increasingly discussed the permissibility and strategic benefits of...a nuclear disarming strike in certain extreme circumstances.” A preemptive nuclear strike on Pakistani nuclear targets is not foreclosed for many Indian strategists. Any doctrinal change from India would naturally elicit more paranoia in Pakistan, a country that would simply further bandwagon on the nuclear card for its external defense (Pakistan is conventionally outmatched by India and spends less than one-fifth of what its larger neighbor spends on defense).

President Ronald Reagan once said that “A nuclear war cannot be won and must never be fought.”  For the sake of the planet and their own survival, Indian and Pakistani leaders should start adopting the mantra asan official position.

Daniel R. DePetris is a columnist at the Washington Examiner and contributor to the National Interest.