Inside an M5 Stuart: A Tanker’s WWII Tale in His Own Words 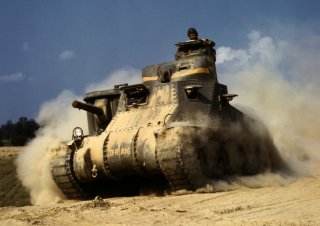 “OH MY GOD!” thought tanker Joe Cotten. “We’re shooting machine guns at a Tiger Royal!” It was late December 1944 in the Alsace-Lorraine region of France, near the German border. From inside his M5 Stuart light tank, Cotten had spotted the enemy heavy tank at the bottom of a ridge and had fired at it with his machine gun when he made his realization. The German panzer was stuck on some train lines and had thrown a track. The driver inside was gunning the engine and rocking forward and back, trying to free the behemoth from its trap. Cotten had already fired on a few soldiers escaping the tank, but its crew was obviously still intact.

Cotten knew the tank below possessed an 88mm cannon that fired high-velocity shells, while his Stuart tank had a 37mm cannon and three machine guns—no match for the enemy. An M4 Sherman pulled up beside Cotten and fired a 75mm round at the heavy tank but it ricocheted off. Cotten knew he was in trouble. Then the enemy turret moved in Cotten’s direction and its cannon elevated like an elephant’s snout sniffing the wind. The gunner was looking for him.

Commanding an M5 Stuart with “the Liberators”

Cotten, a platoon leader in Company D, 47th Tank Battalion, 14th Armored Division—the “Liberators”—would have to rely on his training to get out of this tight spot. He had been drafted into the U.S. Army on November 17, 1942. Back then, he was a new father, his baby girl Marty having been born only 17 days earlier. He left his wife, new daughter, and his low-paying job at a railroad shop in Waco, Texas, to train as a tanker.

After induction at Mineral Wells, Texas, Cotten went to Camp Chaffee, Arkansas, and joined Maj. Gen. Vernon Prichard’s 14th Armored Division. Major James W. Lann, who had come up through the ranks of the National Guard and had served as the range officer, commanded the division’s 47th Tank Battalion. Cotten served in the battalion’s Company D under Captain Henry P. Tilden, and he learned how to march and to be a soldier from Staff Sgt. Pennington P. Smith.

“I followed him around,” Cotton said of Smith. “We became good friends.”

Cotten’s M5 Stuart held a crew of four. In the front sat his driver, also named Smith, and the bow gunner, George Raymond. Deward Key shared the turret with Cotten and served as the 37mm cannon’s gunner. “We called it a pop gun,” Cotten recalled, because it was so inefficient. The M5 was so small that the driver and bow gunner had to close their hatches whenever the turret spun, lest the cannon knock them shut.

From Kentucky to Marseille

Promoted to staff sergeant during training, Cotten was placed in charge of a platoon of five light tanks. In his position, he could talk over the radio with all the tankers in his platoon, as well as his company commander, but he could only listen to the battalion commander.

Once training finished, the whole division transferred to Fort Campbell, Kentucky, to hone its battle skills. It then shipped out for Camp Shanks, New York, where Cotten and his fellow tankers were bussed to the wharf at the Hudson River’s mouth and loaded onto three ships for the trip across the Atlantic Ocean. Their destination: southern France.

After an uneventful ocean journey, Cotten’s ship pulled into the wrecked port of Marseille in southern France on October 28, 1944. His ship had to weave around the partially sunken ships in the harbor.

Once on land, the tankers were driven to a large tank pool outside Marseille to pick out their new vehicles. They then drove them to a range to test-fire the weapons and make any needed repairs. “We had our tanks in good shape,” said Cotten, but he wanted more firepower, so an ordnance crew added a third .30-caliber machine gun to his turret near his hatch. “I used it a lot,” he added.

For extra protection, Cotten and the other tankers stacked sandbags on their tanks to stop Panzerfausts and other antitank weapons.

Fierce Fighting While Cutting Through France

The 14th Armored joined Lt. Gen. Alexander “Sandy” Patch’s American Seventh Army, which had landed in southern France two months earlier on August 14 and had chased the German Nineteenth Army back to the German border where resistance then stiffened. Low on fuel and supplies, Patch’s army halted in the Vosges Mountains to slug it out with the enemy.

Major Lann’s battalion headed east along the Riviera, passing through the ritzy towns of Nice, Cannes, and Monte Carlo—the playgrounds of the rich and famous. The Germans were retreating east and, from time to time, the tankers caught up with rear guards and engaged in fierce firefights.

One day, Cotten and his M5 Stuart tankers were driving in a convoy when they caught up with a freight train filled with German soldiers. The tankers turned their turrets and opened fire. From about 300 yards, Cotten poured fire from his mounted machine gun while other tanks did the same. Some Germans fired back from the train cars’ windows while others jumped out the other side. Cotten could hear the enemy bullets pinging off his tank. “We had a ball firing on them,” he remarked.

During the drive, the tankers sustained themselves mostly on C-rations (canned food) and K-rations (dry food), which were delivered by trucks to the front. Often, the tankers received only hash. “We blamed the drivers for changing out good rations for bad,” Cotten said. He mostly hated the “unmeltable” chocolate bars, known as D-bars. They were hard and rarely softened in coffee. “It was supposed to melt in your mouth … or someplace,” he mused.

Fortunately, one of Cotton’s tankers, Tony Sorgent, loved to cook and created palatable meals for the men on his government-issued portable stove. As the tanks drove across Europe, Sorgent would pick up potatoes, vegetables, and even chickens. Once he had gathered enough ingredients, he broke out the stove and cooked everything in his helmet. In one instance, when he was cooking and the platoon was ordered to move out, Sorgent called to the bow gunner, “Lend me your helmet, mine’s hot!”

While the men rarely went into homes to sleep, they often did enter to dine. In one house, tanker Lowell Carlson found a dining table and adorned it with a tablecloth, fine china, and glassware. Sorgent brought in the food, and the men dined like aristocrats. Once finished, Carlson gathered the four corners of the tablecloth, lifted it into a ball, and tossed it out the window.

To wash down their meals, Cotten and his men sought out alcohol, which was easy to find. “We were in hog heaven!” he recalled. In France, liberated civilians usually handed out bottles of champagne, wine, or cognac. “Champagne was what we were all looking for,” he admitted. The tankers stuffed their bottles in easy access places in their tanks, often under their seats. The men also raided French and German breweries they liberated along the way.

The Battle of the Bulge

The 14th headed north, then turned east into the Alsace-Lorraine region of France on the German border. Farther north, the Germans had broken through the American lines in Belgium and Luxembourg on December 16—and the Battle of the Bulge was on. (Get an in-depth look at the Bulge and other events that shaped the outcome of the war inside WWII History magazine.)

Pushing forward, Cotten’s M5 Stuart headed up a hill and when it crested, he found himself looking down at the German heavy tank rocking back and forth on the train track. He saw several Germans charge out of its hatches and right into the line of fire of his mounted machine gun. That was when he misidentified the tank as a Tiger, and his Sherman tank futilely fired on it.

The tank was not a Tiger but probably a heavy Panzer V Panther, since no Tiger tank units were identified south of the Bulge. The Panther was still a formidable heavy tank, with thick sloping armor and a powerful 75mm high-velocity cannon. During the war, American soldiers often mistook Panthers (and sometimes Mark IV tanks) for Tigers. Cotten simply remembered it as “large, imposing, and unlike any of ours.”

Thinking quickly, Cotten called Captain Tilden, who ordered up two tank destroyers. The tank destroyers roared up, fired two rounds each, and knocked out the enemy tank. Cotten felt a surge of pride later when he drove by the smoldering wreck.

The Blown Bridge Near Haguenau

As the 14th Armored approached the French city of Haguenau, the Germans fought back hard to hold the city’s last remaining bridge over the Moder River. Although firing from well-covered positions, the German infantry was no match for American tanks. “It was a turkey shoot!” recalled Cotten.

Major Lann did not think so, calling over the radio, “Let’s get our act together.” Then, suddenly, the bridge exploded, shaking Cotten’s tank. “We could see the damn thing blow,” he recalled. The Germans stuck on the west side of the river began standing up and surrendering. Many simply raised their arms and put their hands behind their necks. It took three trucks to haul away all the Germans.