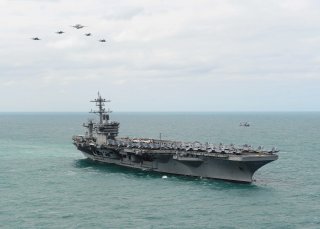 Here's What You Need to Remember: All of this pertains to the growing Navy recognition, which has much precedent throughout history, that carriers will need to operate effectively in extremely high-risk combat environments where they will most likely be confronted with many incoming attacks. Therefore, it is not surprising that layered ship defense systems are fast improving to incorporate a wider sphere of weapons, newer applications and an entire generation of new technologies.

“Avoiding enemy attack” is important in any war, including at sea where large surface ships such as aircraft carriers find themselves under enemy fire.

The concept is to stop an attack before it hits by using active defenses—a technological feat that is a huge priority for the Pentagon. This is why ships, especially U.S. Navy aircraft carriers, are engineered with extensive, layered networks of integrated defenses.

These defenses are integrated and far too many to cite, as they include long-range radar, satellite communications networking and air-surface-drone data-sharing connectivity. These warships also come with electronic warfare systems to jam the guidance systems steering approaching weapons and also long, medium and short-range interceptors to eliminate threats. Finally, a carrier’s escorts even have deck-mounted guns to fight off close-in threats.

An interesting U.S. Naval Institute report from aboard the USS Ford in the Atlantic Ocean says the ship is now amid an “at-sea” phase of its Combat Systems Ship Qualification Trials, a key point in a series of developments intended to get the ship ready for war. As part of the work, maintenance crews are putting wires together, managing the ship’s technical systems and assessing its weapons elevators, the USNI report from the ship explains.

The focus of these kinds of activities has, especially in recent years, shifted more intensely to the improvement of layered ship defenses.

These kinds of defenses, fast-becoming armed with new technologies such as laser-interceptors, longer-range, more precise-missiles and multi-frequency jamming systems are growing in complexity and effectiveness, with the primary aim of avoiding and stopping increasingly sophisticated attacks. Case in point, the Navy is not only preparing a new SM-3IIA longer-range, larger and more precise interceptor for carrier strike groups but has also upgraded the SM-6 with a “dual-mode” seeker enabling it to send a forward ping from the missile itself and change course in flight to adjust to moving targets. The Evolved Sea Sparrow Missile Block II is yet another upgraded weapon which can operate in “sea-skimming” and parallel the surface of the water to take out lower-flying incoming threats. Laser defenses are no longer “on-the-horizon” but are already here arming surface ships.

Also, as part of this equation, surface ship defenses are by no means purely “kinetic” as they say, meaning new networking technologies are linking information operations with electronic warfare to discern threats, identify frequencies and, in some cases, launch attacks against enemy communications and guidance systems. These kinds of approaches may prove of particularly great value should an attack happen in a heavily trafficked area where fragmentation from an explosion could damage civilian vessels.

All of this pertains to the growing Navy recognition, which has much precedent throughout history, that carriers will need to operate effectively in extremely high-risk combat environments where they will most likely be confronted with many incoming attacks. Therefore, it is not surprising that layered ship defense systems are fast improving to incorporate a wider sphere of weapons, newer applications and an entire generation of new technologies.