Interferon for COVID-19: A New Weapon Against Coronavirus? 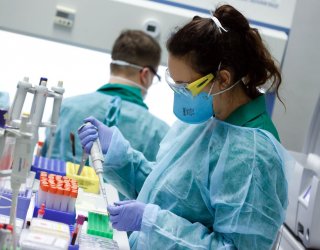 What do multiple sclerosis (MS) and the novel coronavirus have in common? Until this week, not much, but a recent clinical trial has shown a reformulation of a drug used to treat MS can potentially also be used to help patients infected with COVID-19.

SNG001 is an inhaled form of a drug called interferon-beta under development by the UK pharmaceutical company Synairgen. Interferon is normally prescribed for the treatment of symptoms relating to relapsing-remitting MS.

But the clinical trial, Synairgen found that when SNG001 was given to patients with COVID-19, it stopped the development of more severe symptoms, accelerated their recovery, and allowed them to leave hospital earlier.

Like other clinical trials for COVID-19 treatments, the results still need to be thoroughly checked before SNG001 is included as a standard treatment for coronavirus. The drug’s key risks (potential for severe depression) also need to be weighed against the potential benefits.

How does it work?

MS is a condition of the central nervous system. The nerve impulses between the brain and spinal cord get blocked or mixed up. It happens because the body’s immune system attacks the protective layers around nerve fibres. The result is a loss of muscle control and balance.

In contrast, COVID-19 is a viral infection that affects a patient’s ability to breathe due to inflammation putting pressure on their lungs.

What both diseases have in common is the activation of the body’s immune response, so a drug that modulates the immune system for one can potentially work for the other.

Interferon-beta (interferon), a naturally occurring protein in the body, is used as an immunotherapy drug to combat relapsing-remitting MS by reducing inflammation and easing the symptoms of the disease.

Scientists at Synairgen hypothesised it could also treat COVID-19 through initiating the body’s antiviral response and potentially reducing inflammation on the lungs.

It is believed some at-risk patient groups cannot produce interferon as effectively as other people, reducing their ability to fight the virus and resulting in more severe symptoms.

So giving those patients interferon, in theory, should help them fight the virus, alleviate their symptoms, and improve survival rates.

For the treatment of MS, interferon is given as a weekly injection into muscle tissue.

The SNG001 drug developed by Synairgen contains the same interferon therapy used for MS, but formulated as an inhaled product.

Originally, the company was developing SNG001 as a treatment for a different type of lung condition called chronic obstructive pulomary diease (COPD), but it saw the direct potential for COVID-19 as well.

Instead of an injection, SNG001 is given to patients via a nebuliser, a machine that transforms a water solution of interferon into a fine mist that can be breathed in by patients through a face mask.

Between March and May this year, Synairgen sponsored a clinical trial at University Hospital Southampton to test SNG001 for COVID-19 patients. Those eligible for the trial only needed to have mild symptoms of COVID-19.

Other clinical trials conducted in the past for different drugs, such as remdesivir and dexamethasone, required patients to be hospitalised before they were eligible for drug treatment.

In total, 101 patients in a hospital setting were enrolled in the SNG001 trial and were given the drug daily for 14 days. Compared with a placebo, those given SNG001 had a 79% lower risk of developing severe disease.

Patients given the drug were also twice as likely to recover from their infection and were discharged earlier from hospital than those given the placebo.

Before SNG001 becomes standard care for COVID-19 treatment the results of the clinical trial need to be checked by independent scientists.

In the past, trial results for hydroxychloroquine did not stand up to scrutiny after they were announced and the results were subsequently retracted by the research team.

The risks and benefits

If the latest results are shown to be reliable, before doctors decide to make SNG001 a part of the standard treatment for hospitalised COVID-19 patients they will need to weigh its benefits against the potential risks.

One of the most important side effects of the drugs is that it can induce depression.

As a result, interferon is used with caution in patients with pre-existing depression or who have suicidal thoughts. These conditions may already be heightened by the pandemic if a potential patient for the drug has lost their job or they are not dealing well with the isolation of social distancing.

This means doctors would need to undertake a comprehensive mental health screen of all patients they consider for SNG001 treatment.

Other side effects relevant to interferon are that it can worsen seizure disorders or heart failures. So again, it needs to be used with caution in these patient groups.

The results of the SNG001 trial are very promising and potentially give us a treatment to prevent those people mildly infected with COVID-19 from developing more severe symptoms and needing hospitalisation.

But the results need to be checked by independent scientists first, and the drug’s benefits need to be weighed against its risk, as the ability to induce severe depression could cause a wave of mental health problems that make matters worse rather than better.

Nial Wheate is an Associate Professor and the Program Director of Undergraduate Pharmacy at the University of Sydney.

Elise Schubert is a Pharmacist and PhD Candidate at the University of Sydney.