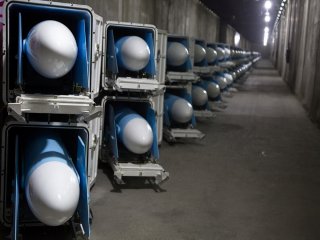 Here’s What You Need to Remember: Iran is continuing to develop increasingly long-range ballistic missiles -- and is firing some shorter-range missiles in combat -- despite demands from the U.S. government that the Islamic republic totally give up any weapons that could, in theory, carry a nuclear warhead.

On Sept. 8 and Oct. 1, 2018, Iran launched Zulfiqar, Quim-1 and Fateh-110 rockets at enemies in Iraqi Kurdistan. The strikes together represent the most intensive Iranian missile attacks in nearly 20 years. The October strike, involving Zulfiqar and Qiam-1 rockets, targeted Islamic State militants near the eastern Syrian border town of Abu Kamal. The volley of Fateh-110 missiles in September struck Iranian Kurdish dissident groups based in Iraqi Kurdistan, killing at least 17 and wounding scores of people, including women and children.

At the time, the Trump administration seemed to believe that sanctions and the threat of force will compel Iran to surrender its missiles and the underlying research-and-development infrastructure without getting anything in return.

But if the Trump administration truly wanted a diplomatic deal to curtail Iran's missiles, it wouldn't have torn up the JCPOA. The administration wants fewer arms-control regimes, even if rolling back decades of painstakingly negotiated agreements means a much greater risk of an out-of-control arms race that could end with nuclear war.

David Axe served as defense editor of the National Interest. He is the author of the graphic novels  War Fix, War Is Boring and Machete Squad. This first appeared earlier and is being reposted due to reader interest.