The Iranian Navy Has a History of Losing Battles 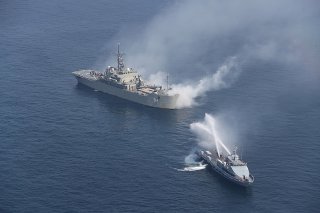 Here's What You Need to Remember: On Oct. 16, 1987, an Iranian missile struck a Kuwaiti tanker, injuring 19 people. In response, a U.S. task force targeted two inoperable oil platforms that IRGC forces were using as bases for armed speedboats.

Tensions have escalated in the Persian Gulf region in the aftermath of U.S. President Donald Trump’s decision unilaterally to withdraw the United States from the agreement limiting Iran’s nuclear program.