Iran's Army Is Huge. So Why Doesn't It Get Much Attention? 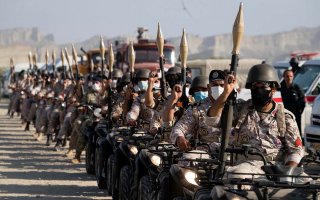 Here's What You Need to Know: Iran’s sheer size, both in geography and population, are a deterrent to invasion.

The ground forces have a number of armored vehicles at their disposal, including 1,663 main battle tanks, 725 reconnaissance and infantry fighting vehicles, 640 armored personnel carriers, 2,322 towed and self-propelled howitzers, and 1,476 multiple rocket launchers. While the sheer amount of equipment sounds impressive, and many pieces, such as the UK’s Chieftain tank, American Sea Cobra attack helicopter and M113 armored personnel carrier, were first-rate weapons for their time, much of it is very dated by today's standards. This equipment has been supplemented by Russian equipment purchased during the 1990s to rearm the battle-worn Ground Forces. In general, however, the Ground Forces remain chronically underequipped, crippled by sanctions and a lack of domestic military technology.