Iran's Nader RPG Has Found Itself On Many Middle Eastern Battlefields 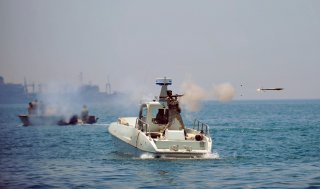 Here's What You Need To Remember: Ironically, while the Nader has become a sign of the IRI’s influence, the design was originally commissioned by the Iranian Shah government from a West German firm, according to a released report by the U.S. Army National Ground Intelligence Center.

The Islamic Republic of Iran’s (IRI’s) influence is felt in almost every conflict in the Middle East. Iranian money, weapons, and training frequently show up in Syria, Iraq, and Yemen. While most of this support is covert, with money going to buy weapons that are common in the region, occasionally there are overtly Iranian forms of aid. One of the most common is the PG-7-AT, or “Nader” RPG round.

Ironically, while the Nader has become a sign of the IRI’s influence, the design was originally commissioned by the Iranian Shah government from a West German firm, according to a released report by the U.S. Army National Ground Intelligence Center. The IRI’s military presumably liked the design and continued production post-coup, and now Naders are found as common aid, given out to feed the plethora of RPG launchers in the region.

The Nader differs from the regular Soviet or Warsaw Pact PG-7V rounds in fusing method and warhead shape. The warhead is slightly thinner than a basic PG-7V at 80mm, though this is larger than the later PG-7VM and PG-7VS rockets. But the most distinctive feature of the Nader is the curved nose. The curve provides several benefits. It’s more aerodynamic, and it houses a novel dual-shell fuzing mechanism. Instead of the single fuze on the nose of the PG-7V, the warhead is triggered when the outer aerodynamic shell crushes against an inner shell. Presumably, this improves fuzing reliability and decrease “bounce hits” since any impact to the outer shell would trigger the warhead, not just the nose. This can also increase the speed with which the launcher is loaded, as regular PG-7V rockets are shipped with a cap on the rocket to protect the piezoelectric fuze to prevent damage to it. This cap generally is removed before firing, which slows down the process. Finally, the curve provides more standoff than the standard PG-7V rocket, potentially enhancing penetration. Despite the improvements, the Nader features similar penetration to a regular PG-7V at around 300mm Rolled Homogenous Armor equivalent (RHAe).

The Nader also was the basis for a longer version with increased penetration known as the “Enhanced Nader” or “Nafez”, which features an even longer nose for more penetration at the cost of velocity. Both the Nader and Nafez were offered for export.

However, the benefits of the Nader and Nafez were apparently not enough to warrant continued production. According to Armament Research Services, the Nader was replaced by the mid-2000s by a simple PG-7V copy known as the “Fath” or PG-7-AT-1. Similarly, the Nafez was replaced by a PG-7VL copy, which also was called the Nafez. Iran has continued exporting these rounds to groups aligned with them in the middle east, which has resulted in their continued proliferation. Jihadist training groups such as Malhama Tactical have included references to Iranian rounds, specifically the PG-7-AT-1 as a PG-7V analog, in their training literature.

While the Nader is out of production now, it represents an interesting western “improvement” on the PG-7V round design that proved an easy way to recognize which groups were being supplied by Iran. The transition to a PG-7V clone makes this harder, as researchers must now look for closer details to determine where a PG-7V round came from.

Charlie Gao studied Political and Computer Science at Grinnell College and is a frequent commentator on defense and national security issues. This article first appeared last April and is being republished due to reader interest.