Iran's Navy Doesn't Have 'Battleships'. Does It Need Them? 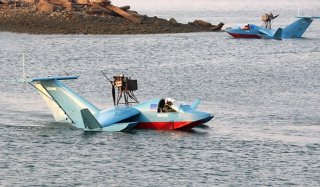 Here's What You Need to Remember: The Soviets were the first to deploy functional GEVs in the 1970s and 1980s, including a few huge Lun-class ekranoplans weighing four hundred tons that could lug huge carrier-killing cruise missiles, and an even larger prototype dubbed the Caspian Sea Monster. The Iranian navy got the memo.