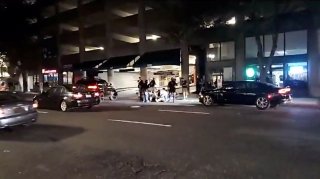 Gabe Johnson, an African American Marine Corps veteran, was lying in bed counting the number of explosions he could hear from his downtown Portland, Oregon, home July 18 and into the next morning.

“I just started counting,” Johnson, 49, told The Daily Signal. “I was like, ‘Hmm, I wonder how many there are going to be tonight?’ And I really did not realize that I was going to get to 82 [counted explosions].”

Following the killing of George Floyd in Minneapolis on May 25, protests quickly grew violent in Portland, with the conflict centered around the federal courthouse downtown, only a few blocks from Johnson’s apartment.

Johnson is no stranger to the sound of explosions, having served as a Marine for 12 years, with much of that time spent in the Middle East.

He remembers closing his eyes on that July evening and thinking, “This sounds no different to me than the time that I spent in Mosul, Iraq. That’s a pretty heavy statement for me, because we were attacked every day.”

It was at that moment, when Johnson realized that his home sounded like it was in a war zone, that he made the decision he had to do something to stand against the violence.

He spent some time talking with the protesters before a young woman stole the flag from his hand and ran down the street with the intention of setting the flag on fire, Johnson said.

A 65-year-old African American veteran retrieved the flag for Johnson, saying, “I was not going to let them burn this flag.”

Moments later, he recalled, two young people ran up behind the older gentleman, “they punched him in the face, stomped him on the street, and took the flag, and threw it over the barrier the federal police [had] put up.”

“Black lives matter,” Johnson said. “People in Black Lives Matter attire, beating up a 65-year-old black man for going and getting the flag back. That makes no sense to me.”

At that moment, Johnson said he began to question Black Lives Matter and who its members actually are as an organization.

He walked the few blocks back to his apartment, but decided to return to the courthouse area later that evening in an effort to further understand what was actually happening in the city he has always called home.

When the Marine veteran and his friend returned to the scene of the riots that night, things “got really, really interesting—really, really fast,” Johnson said.

Not long into the evening, a young woman, wearing a Black Lives Matter mask, T-shirt, and hoodie with an Antifa pin, approached Johnson and his friend to ask what they were doing.

A few moments later, the woman pulled out her cellphone and showed the friends a video of them.

“The Antifa people filmed us while we were there at the courthouse. They filmed us walking back to my house. … And so, they are like, ‘We know where you live, and we have been filming you all day. And we just wanted to know what you guys are down here doing?’ Those are not peaceful protests.”

The intimidation tactic did not work, the veteran said. It did, however, confirm his suspicion that Antifa, comprising far-left militants, had infiltrated Black Lives Matter in Portland.

Antifa is an organized operation, Johnson explained. They have some people working as lookouts, others filming, and of course, those who are the “muscle” of the operation.

Johnson watched violence unfold as the night went on. He was threatened twice, once by a man with a baseball bat and again by an individual who intended to use his skateboard as a weapon. Miraculously, Johnson was only threatened, and not injured.

When he returned to his apartment, he saw a lady with a radio sitting in a car outside his home. When confronted, she casually admitted to being an Antifa lookout. And for the next two days, Antifa posted members of their “anti-fascist” group outside Johnson’s home—he assumes to intimidate him.

Johnson was compelled to take action after witnessing the violence and anti-American propaganda in his own city, and so he began sharing his story with the media.

In August, he was invited to participate in a Portland town hall meeting with about 17 other city and community leaders, including Mayor Ted Wheeler.

Johnson listened to Jo Ann Hardesty, a Portland city commissioner, during the town hall and was struck by how out of touch she, and others, were with the city’s current situation.

“One of the things that [Hardesty] said was that, ‘There has only been one night of riots in Portland. That was the very first night. And since then, there have only been two or three bad actors, and everybody else has been peaceful protesters,’” Johnson recounted.

Either Hardesty is out of touch with Portland’s reality or she has a narrative she wants to promote and “clearly, she has her own agenda,” he said.

Amid calls to defund the Portland police department and a clear lack of support from city leaders, Johnson sought to find a way he could support local law enforcement.

In collaboration with Nine Line Apparel, Johnson created a limited edition “Stand for Justice” T-shirt to raise money for the 16 police chaplains in Portland and Multnomah County. A portion of the proceeds will go to further the work of the police chaplains so they can continue to support law enforcement.

Police chaplains volunteer their time to offer vital spiritual, mental, and emotional support to the men and women who are daily trying to keep the community safe. They are often the first ones law enforcement often turn to in times of challenge, Johnson said.

“You have to think about the mental health of these officers that are out on the street night after night, 14-hour shifts. Their mental health really does matter, because they are policing the street,” and it is the chaplains who provide this support, he said.

The shirts, featuring an American flag under the words “Stand for Justice,” are available only through Labor Day, Sept. 7.

“We are at a turning point, and what I don’t want to see is us turn backwards,” Johnson said. “And I think that if the wrong message continues to be put out, and the amount of violence that’s happening continues to happen, then we will go backwards as a country.”