Is ISIS Trying to Make a Comeback in Iraq? 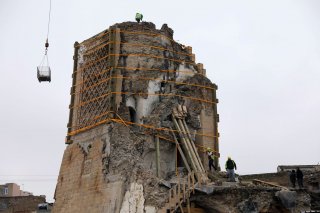 In a world preoccupied with COVID-19, the Islamic State may have faded from international headlines. But a spike of attacks across large swaths of Iraq over the past month shows the group remains a potent threat capable of returning with a vengeance. A lack of pressure from opposing forces and a groundswell of internal support have enabled the Islamic State to increase its insurgent and terrorist activity in its core territory, which threatens to not only further destabilize Iraq but energize other jihadists to carry out attacks across the globe.

While the Cat's Away

Using the lessons learned following its previous defeat in 2010, the Islamic State has amassed money, manpower and resources to pick itself back up again, while opposing foreign forces have either withdrawn or been distracted by other issues. The group has had enough time to recover and recuperate following the loss of its final remaining core territory in March 2019 and the death of its leader Abu Bakr al-Baghdadi in October 2019. The United Nations estimated the group still commands up to 20,000 fighters, has access to hundreds of millions of dollars and earns up to $4 million a month, which — according to estimates from the Center for Global Policy and The Washington Post — it has used to replenish itself.

Meanwhile, numerous military exchanges between U.S. forces and Iranian-backed militias in Iraq, also known as Popular Mobilization Units (PMUs) — most notably around the time of the killing of Iranian Gen. Qassem Soleimani in January — have further eased pressure on the Islamic State by diverting the attention of two of the most powerful actors in Iraq away from the jihadist group and toward each other. In March 2020, the United States began repositioning forces in Iraq away from the Islamic State's areas of operations near Mosul and Kirkuk, as well as in the Anbar and Ninevah governorates, in order to focus on the threat posed by PMUs in other areas in Iraq, where the Islamic State is much less active.

The COVID-19 pandemic has also prompted European countries to temporarily draw down their forces from the fight against the Islamic State. Between March 19 and 25, the Czech Republic, France, the Netherlands and Spain all announced they were temporarily pulling out of Iraq, while Germany and the United Kingdom indicated they were downsizing their presence. While these countries expended far less manpower and resources than the United States in Iraq, they still played a key part in the U.S.-led coalition against the Islamic State.

Following the collapse of the Iraqi government in December, Baghdad has been bogged down in a myriad of economic, health and political crises. The country finally formed a government in May, the primary focus of which will be managing a burgeoning protest movement, as well as containing the country's COVID-19 crisis. Fears of spreading COVID-19 have also forced Iraqi security forces to limit their movements in recent months.

The Mice Will Play

With both its regional and Western enemies distracted, the Islamic State has recently increased the scale and scope of its attacks, kidnappings and other operations across northern and western Iraq. These operations are meant to intimidate locals, weaken security forces, foment instability and serve as propaganda boons for the group. According to the Armed Conflict Location & Event Data Project and the Center for Global Policy, the number of violent incidents in Iraq linked to the Islamic State spiked by 58 percent between March and April alone. When comparing the number of attacks from April of last year (21) to April of this year (87), the number of attacks jumped by over 300 percent.

The Islamic State has also begun testing the waters for more sophisticated attacks. According to the Middle East Institute, the group has recently been conducting nighttime raids, multipronged coordinated assaults and suicide bombings. This marks a notable uptick from the typical drive-by shootings, mortar attacks and roadside improvised explosive devices (IEDs) it had done in previous months. On April 28, the group launched an attack against intelligence headquarters in Kirkuk. Such a direct attack against a government building had been a rare occurrence since the group lost its remaining territory in Iraq in 2017.

The Islamic State has been able to increase the sophistication for a number of reasons:

No Signs of Slowing

In the absence of significant pressure from the forces opposing it, the Islamic State will likely continue to increase in the coming months, building off of the momentum it already achieved. The anti-Islamic State forces are unlikely to be either willing or able to muster formidable countermeasures to contain the group in the coming months, much less drive it back. The United States, for one, has an agreement with Iraq that it will not redeploy its troops to areas of intense Islamic State activity. And amid rising U.S.-Iran tensions, the White House will likely remain preoccupied with containing PMUs in central and southern Iraq. Likewise, European nations are unlikely to redeploy its troops back to Iraq in the near term, as it remains unclear if there will be the political will to do so once the COVID-19 pandemic passes.


The Iraqi government, for its part, will struggle with the immediate economic and health fallout from COVID-19 for at least the next several months. Political stagnation and social unrest could plague Baghdad for years beyond that as well. Iraq's new government said it would prioritize counterterrorism efforts and the fight against the Islamic State, but its ability to do so will be constrained by a decrease in international support and internal political strife. U.S.-Iranian tensions will also remain high for the foreseeable future, raising the risk for further exchanges between U.S. forces and Iranian-backed PMUs that keep two of the Islamic State's primary opponents fighting each other instead of it.

The Islamic State's expanding operations will make the group and its adherents a greater threat on a local, national, regional and potentially international level. The group's attacks, kidnappings and other operations will compound the already high threat to personnel, facilities and infrastructure in northern and western Iraq, and will also pose a resurgent threat to the capital of Baghdad itself, where attacks by the group have dramatically decreased in recent years after the Islamic State lost its remaining Iraqi territory. To be clear, the Islamic State is still years away from being able to recapture territory and reestablish its so-called caliphate, which remains the group's ultimate goal. But by undermining Iraq's already fragile economy and security situation, such attacks risk setting back reconstruction efforts in areas that Iraqi authorities recaptured from the Islamic State in 2016 and 2017.

There is also the risk that the Islamic State could use Iraq as a staging ground for attacks in other regional countries such as Jordan, Iran and Lebanon. The group has launched attacks from Iraq into these places in the past and is intent on doing so again. The group has also been increasing its insurgent activity in Syria, which could serve as another springboard for launching attacks into neighboring Jordan and Lebanon.

The Islamic State's surging activity in Iraq will play a role in reenergizing grassroots militants elsewhere in the world, who have no direct connection to the group but are still inspired by its ideology to carry out attacks. While there is no precise science for determining when and where an attack will take place, these are most likely to spring up in locations where attacks by grassroots militants occurred during the peak of the group's power in 2014 and 2015, including Western European countries such as Belgium, France, Germany and the United Kingdom. Middle Eastern countries such as Jordan, Lebanon, Morocco, Saudi Arabia and Tunisia also face a heightened risk of being targeted.

Returning With a Vengeance

Since beginning its initial resurgence in Iraq during 2011, the Islamic State has morphed from a local insurgent group to a global movement, with branches that have continued to launch attacks in areas ranging from West Africa to Afghanistan. And without sustained pressure from its adversaries, including the United States and Iraq, the group is well-positioned to continue its resurgence in its core territory — a development with potentially grave global consequences.

Rumblings of an Islamic State Resurgence in Iraq is republished with the permission of Stratfor Worldview, a geopolitical intelligence and advisory firm.