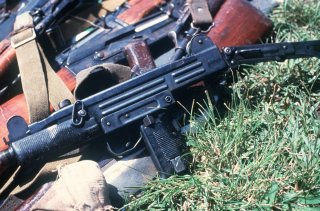 Here's What You Need to Remember: The Uzi was a textbook example of a simple project successfully completed by a nascent arms industry. A well-designed, reliable submachine gun made of stamped parts, it was simple to build and had universal appeal.

The proliferation of AK-pattern weapons on the Arab site of the equation—particularly the AKM—set the Uzi on a path to disfavor. The Uzi delivered a pistol-caliber round a maximum of two hundred yards, while the AKM could fire an assault-rifle-caliber round with reasonable accuracy three times as far. That means that at ranges beyond two football fields, Arab troops could easily achieve fire superiority over their Israeli rivals armed with a mixture of Uzis and FALs. Uzis would continue to serve with Israeli special forces units, but IDF infantry were often issued M16s and later locally designed and produced Galil assault rifles instead.

Outside of Israel, the Uzi proliferated widely, contributing to its global image. Countries as diverse as Japan, Germany, Belgium, Peru, and Brazil all used the Uzi in their armed forces, as well as producing it under license. The Uzi wormed its way into a variety of Third World conflicts, particularly in sub-Saharan Africa, was active in antirevolutionary conflicts in Central and South America, and became an object of desire in the United States among criminal gangs.