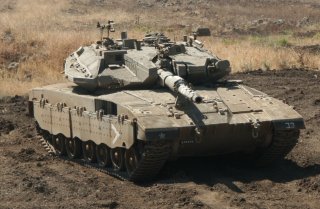 Here's What You Need to Remember: While a significant portion of Israel's forty-eight killed troops during “Protective Edge” were victims of missile strikes, largely absent from the casualty lists are crews of Israel's Merkava tanks. Instead, Hamas has been most successful targeting Israeli armored personnel carriers. In particular, the gravest such incident saw seven Israeli soldiers killed when traveling in an outdated M113 armored personnel carrier.

In typical war reporting, casualty figures are cited and recited, accompanied by political arguments and counterarguments, while information on military events remains confined to the question of "who's winning". Israel's various operations in Gaza over the past decade have been no exception. Only once their effectiveness was obvious, did Israel's Iron Dome antimissile system gain broad media attention. Today it is arguably the single most important factor shaping the conflict between Israel and Hamas.

But while Iron Dome has become a household name, recent fighting has evinced the importance of a second, still newer Israeli missile-defense system: the armor-mounted "Trophy" (or "Windbreaker") anti-guided missile (ATGM) protection system.

At this point, it is clear that Israel's current Gaza operation "Protective Edge" is running a course significantly different from its two recent predecessors, "Pillar of Defense" (2012) and "Cast Lead" (2009). In contrast with those previous engagements, Israel’s current operation has run into an effective defensive strategy that Hamas has spent years preparing, centering on a system of both offensive and defensive tunnels, some running deep into Israeli territory (over forty of such tunnels have been discovered thus far). As part of its tunnel strategy, Hamas also spent significant efforts training commando teams for a form of highly mobile guerrilla warfare in and around the tunnels. Such teams, typically ten to fifteen members strong, have extremely short life expectancies, typically being wholly destroyed in an engagement. Nevertheless, they have resulted in significant casualties on the Israeli side. At the time of this writing, the tally stood at forty-eight IDF troops killed. In this way, Israel's operation "Protective Edge" seems more akin to Israel's 2006 war with Hezbollah than to the previous conflicts with Hamas. Hezbollah, too, managed in large part to hold its own against the IDF, sufficiently so as to cause significant soul searching among Israel's military and political establishments.

But there is a striking and telling difference between the IDF casualty figures that came out of Lebanon in 2006 and those coming out of Gaza today. In fact, this difference may prove critical to the outcome of "Protective Edge", as well as, possibly, to the nature of Israel's battle tactics for some time to come.

In 2006, Hezbollah's tactics relied heavily on the use of Russian "Kornet" antitank guided missiles (ATGM) to inflict significant damage on Israel's vaunted "Merkava" (Chariot) tanks. Television footage from the conflict shows long columns of IDF armor jammed in the narrow wadis of Lebanon's mountainous terrain, providing easy targets for Hezbollah's missiles. Indeed, to some commentators, Hezbollah's 2006 missile threat to Israeli tanks seemed so severe as to render questionable the very future of Israeli armor in the fight against guerrilla organizations, such as Hamas and Hezbollah. A recent Ynet article cited IDF Chief Armor Officer Brig. Gen. Shmuel Olansky saying: "There were people who said before the operation: Shut down the tanks, put them on display in museum". Antiguerrilla operations, it seemed, were destined to become a largely infantry-centered affair.

However, today's Gaza operation makes matters seem rather different. While a significant portion of Israel's forty-eight killed troops during “Protective Edge” were victims of missile strikes, largely absent from the casualty lists are crews of Israel's Merkava tanks. Instead, Hamas has been most successful targeting Israeli armored personnel carriers. In particular, the gravest such incident saw seven Israeli soldiers killed when traveling in an outdated M113 armored personnel carrier. (The use of the outdated M113 has caused significant anger among the Israeli public. The U.S. army introduced the M113 as early as the 1960s, but Israel possesses much more advanced "Achzarit" and "Namer" personnel carriers. After the deadly incident, a convoy of these newer vehicles was promptly ordered to travel south from Israel’s northern border.)

Even as it has thus far been installed on only a portion of Israel’s tanks, the improved safety for Israeli tank crews can be attributed in significant measure to the "Trophy" antimissile system. Developed by Israel’s Rafael and Elta industries, the Trophy system has a three-step operation sequence. First a radar detects an incoming missile, while the system’s computer calculates the projectile’s trajectory to determine whether or not it will impact the vehicle. If so, the Trophy system pivots an explosive charge towards the missile, which is finally detonated so as to launch a barrage of pallets in the direction of the warhead, destroying it mid-flight.

The success of Trophy may have two significant strategic implications.

First, it might influence the way Israel chooses to conclude "Protective Edge". As reported by DEBKAfile, thus far, Trophy has been installed only on the Merkava Mk. IVs of Israel's 401st "Iron Trails” Brigade, which bore the brunt of ATGM fire during the 2006 Lebanon campaign (the brigade lost twelve troops). However, even by itself, the 401st might serve as an effective spearhead of Israel's attempts to subdue the strongholds of Hamas in Gaza's urban areas. In turn, this consideration might nudge the Netanyahu government towards rejecting premature cease-fires, and continuing the operation to a decisive conclusion. In this light, it may not be a coincidence that recent days have seen former diplomats to Israel make impassioned pleas to the international community to allow Israel to hand Hamas a decisive defeat.

Second, Trophy may carry implications even beyond the current war in Gaza. As noted, post-2006, the vulnerability of armor to ATGM fire has tilted thought about antiguerilla warfare in the direction of infantry operations. Should dawn rise on an era of near-invulnerable armored platforms, this paradigm may well be unsettled.

David de Bruijn is currently a PhD candidate at the University of Pittsburgh, having previously attended Cambridge, Berkeley and Utrecht. Outside of his academic work David writes and blogs on topics of international politics and the Middle East. This article first appeared several years ago and is being republished due to reader interest.

Editor's Note: This piece has been updated from its original version.