Israel Could Survive Without Nuclear Weapons 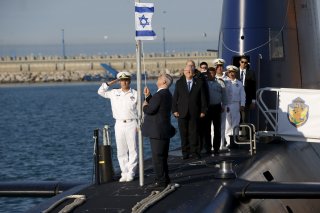 Here's What You Need to Remember: Since the development of the program, but largely unrelated to its existence, the political situation has tipped in Israel’s favor, the conventional balance has grown to favor Israel and the threat profile presented by Israel’s opponents has moved in an unconventional direction.

Since the early 1970s, Israel has informally maintained a nuclear deterrent. In order to prevent the activation of a variety of legal instruments that would disrupt Israeli relations with the United States and Europe, Israel has not acknowledged the program. It remains, however, the worst-kept secret in international politics.

But a country always has options. What if Israel had never developed these nukes? What impact would a different decision have had on Israel’s security, and on regional politics more broadly?

Origins of the program

Israel started research into nuclear weapons in the late 1940s, under the belief that only a nuclear deterrent could prevent national destruction. Israel was hardly alone in this conviction; at the time, many analysts expected the wide proliferation of nuclear weapons technology. Copious French assistance made the program possible, along with covert funding from groups in the United States. Great Britain also periodically delivered supplies necessary to the program. Washington helped mainly by looking away.

As Israel’s security dilemma became more stark in the 1950s and 1960s, the program accelerated. The Israel Defense Forces won stunning victories in 1948, 1956, and again in 1967, but with only a thin margin of error; the hostility and growing strength of Soviet client states in Syria, Iraq and Egypt made the future uncertain.

Israel probably constructed its first nuclear device around 1966, with an arsenal of usable weapons available by the early 1970s. The first delivery systems were fighter-bombers (reports vary as to whether Mirage IIIs, F-4 Phantoms, or A-4 Skyhawks bore the primary burden), supplemented before long by ballistic missiles.

As with every other nuclear power since 1945, Israel has refrained from using its weapons in combat. However, the presence of nukes can have wide-ranging political effects (indeed, this is half the point of building them). Israeli nuclear weapons may have deterred regional rivals, but may also have driven regional proliferation. How plausible are these claims?

There are two problems with the claim that Israeli nukes have deterred regional adversaries. The first problem is that Israeli conventional dominance, established in 1967 and 1973 and expanded since, may have been enough. The second problem is that Israel has come under attack on multiple occasions since the 1970s from foes without nuclear weapons. Indeed, in 1973 Israel suffered a massive conventional assault from Syria and Egypt, finally prevailing through armored maneuver on both fronts. Israel considered using nuclear weapons in 1973, but the tactical situation developed in a way that made the “Samson Option” unnecessary.

With respect to proliferation, at least three states in Israel’s immediate neighborhood have pursued their own nuclear programs since the 1970s. Iranian interest in nuclear weapons began in the mid-1970s, with the program advancing in fits and starts until the present day. The Revolution, the Iran-Iraq War, and the recent nuclear deal with the United States have slowed progress or brought it to a halt. For its part, Iraq pursued a nuclear weapons program through the 1980s, briefly interrupted by the Israeli attack on the Osirak reactor and then pursued with redoubled enthusiasm. The program ended, for all intents and purposes, with the Gulf War of 1991. Israeli fighter-bombers disposed of Syria’s nascent nuclear program in 2007.

Iran, Iraq and Syria each had good reasons to pursue nuclear weapons completely apart from the existence of the Israeli deterrent. Rhetoric notwithstanding, Iran and Iraq faced a greater threat from one another than from Israel. Syria, bordering on Israel and having lost territory in 1967, faced a more complex decision. However, the threat posed by the United States may have had a greater impact on Syrian decision-making than the long-standing Israeli deterrent. Thus, the Israeli nuclear program has not driven regional nuclear proliferation in any meaningful sense. The wealthiest states (Egypt, Turkey, Saudi Arabia) have refrained, while the proliferators have developed programs largely for reasons other than Israel.

In 1948 Israel’s founders saw a world in which something like the Holocaust could happen, and in which nuclear weapons could make it happen with frightening speed. The concentration of a great part of the world’s Jewish population within Israel enhanced conventional deterrence, but at the same time increased nuclear vulnerability. While Israel is not and never has been a “one bomb country,” a dedicated foe with access to a moderate nuclear arsenal could easily pose an existential threat.

What were Israel’s alternatives, given such a world? Obviously, Israel could have refrained from pursuing nuclear weapons, focusing instead on nonproliferation efforts and on conventional deterrence. With respect to the latter, Israel has already achieved presumptive conventional superiority over any foe or potential combination of foes in the region; what more can you ask?

On the former, the primary multilateral instruments of nonproliferation came into effect after the completion of the Israeli nuclear program. Strong Israeli advocacy for nuclear nonproliferation might have carried some weight in the 1950s and 1960s, especially given the Jewish experience of World War II, but it is hard to see how this would have resulted in a stronger, or earlier, nonproliferation regime. As noted above, it is difficult to argue that any nuclear proliferant has developed its program specifically in response to Israel’s (with the possible exception of Syria), and it is hardly clear that the Israeli example made much difference to decision-makers in India, North Korea or Pakistan.

South Africa poses the biggest problem for this argument; South African leaders clearly saw the Israeli program as political relevant to their own situation, and South Africa derived some technical assistance from the Israelis in the 1970s. However, the South African program disappeared with the end of the apartheid government, which was in any case viewed as deeply illegitimate around the world.

More recently, there is little question that Israel has played a spoiler role in regional and global nonproliferation efforts over the past two decades. It’s less clear, however, that this role has had any real consequences. Declaring a “nuclear free zone” in the Middle East might have changed minds in Tehran about the utility of a deterrent, but more likely Iran would have continued to pursue what it saw as its national interest. Of course, things could change; if Saudi Arabia, Egypt or Turkey decide to go nuclear, then we might look differently at Israeli intransigence on the nuclear question.

Fireworks aside, the Israeli nuclear program may not have made much difference at all, either to Israel’s security or to regional nonproliferation efforts. Since the development of the program, but largely unrelated to its existence, the political situation has tipped in Israel’s favor, the conventional balance has grown to favor Israel and the threat profile presented by Israel’s opponents has moved in an unconventional direction. This has made the nuclear deterrent less critical to Israel’s survival, notwithstanding the running apocalyptic commentary about Iran’s nuclear aspirations.

This isn’t to say that Israel was wrong to embark on a nuclear program, or that it should unilaterally give up its nukes now. The political developments of the 1970s and 1980s, including the defanging of Egypt, the cauldron of the Iran-Iraq conflict, and the end of the Cold War, were difficult to foresee from the vantage point of the mid-1960s. Perhaps most importantly, the ironclad relationship between Israel and the United States did not exist when the Israelis established their program. Given the decision, taken in the late 1940s, to try to make Israel the epicenter of Jewish global life, nuclear aspirations to defend that epicenter hardly seem unreasonable.