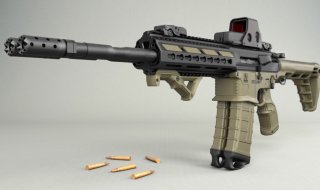 Key Point: This weapon is unique because of its double barrel. It is a powerful AR variant.

The Israeli company Silver Shadow several years back attracted attention for its double-barreled AR-type rifle, the Gilboa DBR Snake. For the most part, it’s an AR, uses AR parts and fires the 5.56-millimeter AR round. Except that it has two separate barrels, two magazines and two ejection ports — with two triggers as if two AR rifles had smashed into each other.