The Israel-UAE Deal is All about Iran 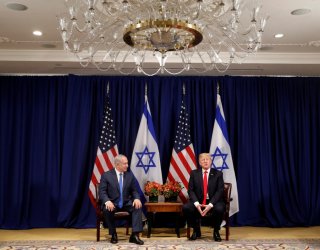 The normalisation of relations with Israel by Bahrain and the United Arab Emirates was choreographed to help the domestically embattled Israeli Prime Minister Benjamin Netanyahu and US President Donald Trump. It essentially cements Netanyahu’s long-standing dictum of ‘peace for peace’ not ‘land for peace’, and Trump’s efforts to shore up a US–Israel–Arab front against Iran and its allies.

These developments are set to seriously harm the Palestinian cause and push Iran further into Russian and Chinese arms, and they are unlikely to bring stability and security to the turbulent Persian Gulf.

The Arab–Israeli conflict has led to three wars and the expansion of the Jewish state to a size three times larger than the area allocated under a UN partition plan 73 years ago. The likelihood of a sovereign Palestinian state materialising along the lines of the 1967 borders has never been slimmer. And a deeper and wider barrier has been created that will prevent meaningful cooperation for regional stability between Iran and the Arab kingdoms, except Qatar, which has been under a Saudi-led blockade since 2016 partly because of its desire to have a good working relationship with Iran.

Neither the UAE nor Bahrain has extracted anything from Israel that will help bring the Palestinians self-determination. They have effectively ended the Arab League’s approval at its 2002 Beirut summit of Saudi Arabian initiatives that offered recognition and peace to Israel in exchange for its withdrawal from occupied Arab lands, including the West Bank, the Gaza Strip and East Jerusalem, for a Palestinian state. The initiatives basically reflected UN Security Council resolution 242, adopted shortly after the 1967 Arab–Israeli War.

The UAE, under the leadership of its founder and avowed supporter of the Palestinian cause, the late Sheikh Zayed bin Sultan Al Nahyan, and Bahrain under its reigning monarch, Emir Hamad bin Isa Al Khalifa, were signatories to the initiatives, which were subsequently endorsed by two other Arab League summits. Israeli Prime Minister Ariel Sharon, from the right-wing Likud Party, rejected the initiatives with a resolute stance against land for peace.

However, Israel’s position changed under Sharon’s successor, Yitzhak Rabin, from the centre-left Labor Party. The signing of the Oslo Accords by Rabin and Palestinian leader Yasser Arafat in the presence of US President Bill Clinton on the lawns of the White House in September 1993 essentially affirmed the Arab stance of ‘land for peace’.

The accords were to lead to a final settlement with the creation of an independent Palestinian state. Most Arab states and the international community hailed the accords as the dawn of a new era for peace in the Middle East. Sharon and Netanyahu vehemently opposed them and advocated ‘peace for peace’, successfully rendering the accords defunct. Netanyahu also later extinguished the ‘two-state solution’, which was promoted by the George W. Bush administration and endorsed universally, by promising that there would be no Palestinian state under his watch.

The UAE and Bahrain leaderships, who are not driven by Arab nationalist causes and feel more domestically and regionally vulnerable than their traditional predecessors, have found it expedient to opt for Netanyahu’s peacemaking paradigm, and to sign up to Trump’s policy of ‘divide and rule’ to forge a US–Arab–Israeli regional alliance against Iran as the main enemy.

Trump’s policy is not new. It has been a centrepiece of the American approach to containing the Iranian Islamic regime since its advent 40 years ago, but none of his predecessors pursued it with as much gusto as he has.

The latest deals are set to generate exchanges between the signatories in many fields, including security and intelligence, but they also appear to be timed to assist Netanyahu and Trump out of their domestic predicaments. The Israeli leader faces a trial on corruption and fraud charges, and Trump faces the November election amid widespread criticism of his management of the Covid-19 crisis, the consequent deteriorating economy, and the savagery of climate change.

The deals, which are likely to be followed by agreements with Saudi Arabia and the Sultanate of Oman, were timed to coincide with the American troop withdrawal from Afghanistan under the US–Taliban peace deal and Washington’s announcement that it will withdraw 2,000 of the 5,200 troops it has in Iraq. Trump is now in a position to present himself as a peacemaker on the world stage and a leader who ended America’s entanglement in the costly Afghan and Iraqi conflicts.

Whatever the outcome for Netanyahu and Trump, the growing Israeli–Arab rapprochement certainly strikes a serious blow to the cause of the Palestinians, who are now increasingly left behind by their Arab counterparts. The only ray of hope they have is if Netanyahu fails to win his legal battle, if Trump loses the elections, and if a Joe Biden administration adopts an approach similar to that of his Democratic predecessor, Barack Obama, who upheld the internationally backed two-state solution as the best option for settling the Israeli–Palestinian conflict.

Concurrently, the developments are set to prompt Tehran to deepen its strategic ties with Moscow and Beijing, thus making the Gulf vulnerable to wider rivalries and potential conflicts.