Israel Wants to Add the F-35 to its Nuclear Triad 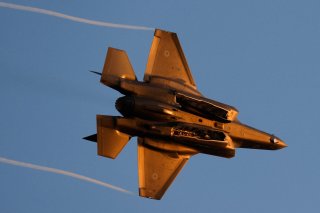 Here's What You Need to Remember: Although the government refuses to officially acknowledge it, Israel is known to have a nuclear arsenal with as many as 100 warheads. The Jewish State is also believed to possess a nuclear triad, consisting of ground-based Jericho missiles, Dolphin-class submarines equipped with sea-launched cruise missiles and some combination of nuclear-capable aircraft.

By the end of this year, Israel is expected to become the second country after the United States to declare Initial Operational Capability for its F-35s. Already, Tel Aviv has taken possession of five of the multirole fighters, andfollowing an agreement late last month to buy an additional seventeen planes, will ultimately purchase fifty planes. All fifty F-35s are scheduled to be delivered by the end of 2024.

Of course, Israel doesn’t have access to the B61-12 bomb, and some have doubted Israel’s ability to refit the planes in order to carry its indigenous nuclear warheads. “Changing the internal wiring and engineering of the plane to accommodate a different warhead could be done, but not without significant challenges,” one analyst told War is Boringin 2014. “Especially for a plane that’s had the extensive engineering challenges that have been the hallmark of the F-35 program.”

Zachary Keck (@ZacharyKeck) is the Wohlstetter Public Affairs Fellow at the Nonproliferation Policy Education Center. This article first appeared several years ago and is being republished due to reader interest.