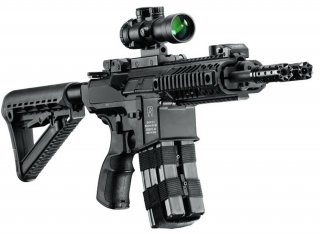 Here's What You Need To Remember: "Fire superiority” is shooting more bullets at the enemy, accurately, than he is shooting back at you. This gun was designed to achieve that.

The Israeli company Silver Shadow recently attracted attention for its double-barreled AR-type rifle, the Gilboa DBR Snake. For the most part, it’s an AR, uses AR parts, and fires the 5.56-millimeter AR round. Except that it has two separate barrels, two magazines and two ejection ports — with two triggers as if two AR rifles had smashed into each other.

The Snake doesn’t use duplex ammunition, but it faces a same basic questions of efficiency, weight, and waste. Ammunition adds weight, yet two bullets traveling side-by-side are still traveling toward the same target. The enemy will likely not know the difference from a standard, single-barrel AR as the rounds snap around them.