Israel's Vaccine Rollout Has Been Fast, So Why is it Controversial? 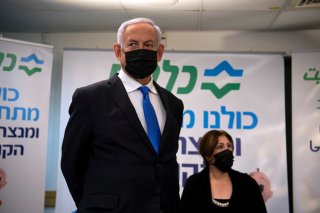 Israel is rolling out a fast-tracked COVID-19 vaccine programme, giving a first dose to 48% of its population of 9 million in five weeks. The country’s aim is to vaccinate 80% of the population by the end of May 2021.

But questions have also been raised about the way the programme has been carried out. So what can be learned from Israel’s experience?

A deal with Pfizer

The Israeli government struck a deal with Pfizer for accelerated access to the Pfizer/BioNTech vaccine, in return for providing the anonymised age, sex and demographic data of vaccinated people. This is made possible by the fact that Israel has a universal healthcare system and each person has a digitised health record.

The country also has the health infrastructure and logistics to deliver the vaccines. The occupied territories, meanwhile, have a different healthcare system.

Preliminary evidence from the rollout is giving us an insight into how effective the vaccine is in the real world. After 14 days, a group of people who had received one dose of the vaccine reportedly showed 33% fewer infections than an unvaccinated group. This was a disappointingly low level of protection, although the Israeli Ministry of Health later said that the full protective impact of the vaccine had not yet been seen.

Much more encouraging are recent reports that, of 428,000 Israelis who received a second dose of the vaccine, only 0.014% went on to contract the virus.

It is important to note that this data is preliminary and has not been peer-reviewed by other scientists. We will require more than figures released in the press to properly understand the efficacy of this vaccine in real-world conditions.

The deal with Pfizer has also raised privacy issues. There are safeguards in the agreement and, in a public health emergency, collecting demographic data is essential to seeing what works and what does not. But whether individual data should be shared with profit-making companies without explicit consent remains an important question, especially as information on 140,000 COVID patients has already been shared with Shin Bet, Israel’s security agency, without due approval and authorisation.

The other aspect of the deal to consider is the price paid. The full details of the deal are not available but reports suggest that priority access to the vaccine has come at a high premium to what the EU and US are paying.

Israel’s position is that the total price paid for the vaccines is the cost of just two days’ lockdown, and so worth paying. Paying the premium may change the priority of delivery within Israel itself but, given the size of the country, it will not necessarily affect the global market. However, if other countries start breaking ranks as well, then the global market for vaccines will be severely affected.

As a number of countries have placed enough orders to vaccinate their citizens several times over, other countries, especially lower income ones, may find it a challenge to access the minimum number of doses they need. In this context, whether the vaccines should go to the highest bidder, or be distributed based on ethical criteria protecting the most vulnerable, is something to think about.

What happens to the people living in the West Bank and Gaza Strip is perhaps the most controversial aspect of the vaccination scheme. While Jewish settlers are receiving the vaccine, Palestinians in occupied territories are not.

The position of Israel is that this is the responsibility of the Palestinian Authority. But the Fourth Geneva Convention, which covers control of epidemics and contagious disease, arguably means that this duty falls on Israel as the occupying country.

There is also a domestic political dimension to the vaccine policy. Israel has had one of the highest infection rates in the world. During the second wave of the pandemic, after protests against the government’s handling of the pandemic, a national unity government was formed in May 2020.

However, there were continued protests and the government collapsed on December 22 2020 with another general election called for March 2021. The agreement with Pfizer was signed on January 6 2021.

From a political economy perspective, the responsibility of a government is to protect lives and livelihoods, and so Israel’s efforts to fast-track vaccination are certainly to be commended. The data provided to Pfizer is a public service to other countries as it will provide information on the efficacy of the vaccine aiding more realistic assessments of vaccination strategies.

As we wait to find out more, the lessons drawn from Israel’s ambitious vaccination programme should be balanced with understanding its institutional, political, and economic context.