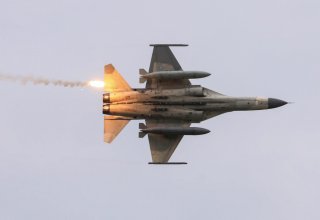 U.S. Defense Secretary Mark Esper is slated to visit Guam on Aug. 29 and meet with Japan’s Defense Minister Kono, who is flying in for the occasion aboard a Japan Air Self Defense Force airplane. According to Military Times, Secretary Esper will also visit the Republic of Palau, and Hawaii.

According to Japan’s Jiji Press, citing Japanese government sources, the officials will discuss Japan’s new missile defense program to replace the abandoned Aegis Ashore plan. Jiji says they will “… exchange opinions on China's expansion of military activities in the South China Sea and the East China Sea” and “confirm the policy that Japan and the United States will promote cooperation with countries that support the vision for a free and open Indo-Pacific region.”

These are worthy subjects, certainly, but this is a long way to travel for both officials and their staffs to discuss something that could be done – and most certainly has been often done – over the military equivalent of Zoom. What else might they discuss, from the top of their respective defense establishments, to make this worthwhile?

Secretary Esper’s scheduled stops in Palau and Hawaii add some intrigue. The Republic of Palau is the western-most of the Freely Associated States. The others are the Republic of the Marshall Islands and the Federated States of Micronesia. In exchange for economic assistance and eligibility for some federal programs, United States military forces may operate in these states. Guam certainly understands the strategic advantages that these island nations offer. In the past, their loss meant Guam’s loss.

These two officials are the senior defense officials representing “the most important bilateral relationship in the world, bar none” in Ambassador Mansfield’s famous description. What topics might be worthy of their time, limited as it is? I suggest six linked initiatives that must be driven from the top to succeed.

Create a sense of urgency. Chinese and North Korean power projection capabilities have grown exponentially over the past 30 years, eroding Japanese and American security. China’s power grew with her economy. North Korea’s specialized power projection developed from her global smuggling networks aided by nuclear proliferation entrepreneurs. Chinese forces challenge Japan’s air and sea space daily while their political warfare campaigns attempt to subvert Japanese politics. Our conventional deterrent strength is challenged by both sheer numerical odds and the changes wrought by developing technologies. These technical challenges include massive surveillance, very high-speed weapons accurate at distance, the weaponization of social media in the cognitive space, autonomous weapons, cyberspace attacks, and space-based systems. We need urgency to reverse the decline of our deterrent capability with a combined U.S.-Japan program with measurable requirements.

Put “collective” in Collective Self Defense. The issue of Japan’s right to collective defense has been settled. Japan’s constitution is not a suicide pact. Like every other nation in the United Nations, Japan is so entitled. Self-defense is not “war as an instrument of policy,” it is the protection of Japanese territory, interests, and lives. Creating the ability to integrate Japanese and U.S. maneuver and fires inthe defense of Japan will go a long way to restoring the strength of our conventional deterrence, “regaining the advantage” as the title of a recent report to the U.S. Congress by the Commander, USINDOPACOM charged.

Start with the urgent. The air and missile defense of Japan is the air and missile defense of Guam and the rest of the United States. Geography and geometry make that so. A joint U.S. – Japan committee of senior officials should be created to drive the prompt creation of joint, combined, U.S.–Japan systems taking full advantage of developments across all domains and sensor technologies.

Build alliance command and control. Winston Churchill famously said the only thing worse than fighting with allies is fighting without them. We should give “with” a try. We need to create alliance command and control systems and procedures that simultaneously protect the sovereign rights of each nation, including command of its armed forces, while at the same time fighting as one force, fully integrated, across air, land, sea, space, cyberspace, and the information environment. Combined contingency plans need to be made and rehearsed to ensure a full understanding of roles and missions and to maintain readiness for likely attacks.

Make automation our friend. There is a revolution underway as inevitable as steam replacing sail, Wikipedia replacing Encyclopedia Britannica. Unmanned aerial, surface and subsurface systems will be a seminal aid to defense. Automating the sensor to shooter kill chains across all domains will speed reaction much faster than we have ever achieved before. We automate lethal force on a small scale now, with the Phalanx Self-Defense System for ships as an example.

Create a combined training environment. In alliance agreements years ago, the U.S. agreed to provide for the continuous presence and training of Japanese forces in Guam. We need to specify that we mean the training of high-level commanders and their staffs in the arts and science of fighting a combined U.S.-Japanese force in the defense of Japan. Such training would be done in a simulation network that combines live forces with virtual and constructive components to portray a strong challenge to the training audience – the commanders and their staffs – while remaining economical with a small physical footprint. This fits nicely with the drive-by Commander INDOPACOM to link all U.S. training facilities and capabilities in his area to enrich this type of training. Small forces can access Palau, the Marshall Islands, the Federated States of Micronesia, and the Commonwealth of the Northern Mariana Islands as part of this training. As an included benefit, such presence would provide essential reassurance of U.S. and Japanese support and maintain an advantageous dispersal of our forces.

Ten minutes per topic by leaders inclined to do something, and not just admire the problems, would make this a good visit. Maybe they can even leave Andersen Air Force Base to see a bit of Guam outside the gate?

This article first appeared at The Guam Daily Post.