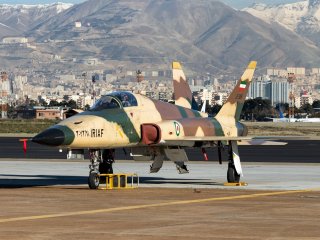 Key point: Iran's military hardware is aging, but it is trying to keep up. The designs Iran is coming up with are rather lackluster.

But performance specifications and technical details for these aircraft have remained either vague or nonexistent. This may be less due to secrecy than because additional details would likely be unimpressive because the Saeqeh is a reverse-engineered American F-5 Freedom Fighter with a new tail and upgraded avionics.

The F-5 Freedom Fighter traces its lineage to a 1950s-era Northrop project that yielded the two-seat T-38 Talon trainer still serving in the U.S. Air Force today. A single-seat variant, however, evolved into the F-5, a lightweight supersonic fighter for export to less wealthy military allies of the United States. Initially priced at just $756,000 per plane (around $6 million, adjusted for inflation), the elegant little fighter could carry more than six thousand pounds of bombs on five hardpoints, as well as two Sidewinder heat-seeking air-to-air missiles on the wingtips. The later F-5E Tiger II variant added radar, lengthened the fuselage to carry additional fuel, enlarged the stubby wings for improved maneuverability, and upgraded the J85 turbojets, boosting maximum speed to Mach 1.6. Freedom Fighters went on to see extensive combat over the skies of Vietnam, Ethiopia, Iran, Kuwait, and Yemen—and are actively being used in ground-attack missions today by the air forces of Tunisia and Kenya.

By 2004, the new Saeqeh fighter was featured on state TV. It has also been variously named the Saeqeh-80 and the Azarakhsh-2. This also appeared to be an F-5—but with two instead of one vertical tail stabilizer, canted outwards like those on F-18 Hornet. To drive the comparison home, the Saeqehs were painted navy blue and yellow, so that they resembled the Blue Angels aerobatics team. The Saeqehs also have additional wing strakes, and some sport new square jet intakes. The aircraft was inspected by then president Mahmoud Ahmadinejad and fired rockets at targets in a 2007 war game.

In any case, while Saeqeh-2 may not truly be a “new” or “mass-produced” fighter in the way those words are generally understood, it’s still a maneuverable, supersonic jet fighter and could be a useful trainer/light fighter like the Korean FA-50 Golden Eagle. However, the Iranian jet has yet to be seen carrying long-range air-to-air missiles and precision-guided weapons, which are essential capabilities for modernized third-generation MiG-21s or F-4 Phantoms. Given Tehran’s demonstrated track record of hyping its military technology to the point of stretching the truth, the silence on this aspect of the Saeqeh’s abilities may be telling.

That may be beside the point, however. The modified and rebuilt F-5s may be a way for Iran to gain experience in jet fighter production, test out the twin tail configuration, and make good propaganda for Iran’s industrial capabilities. Experience gained from the Saeqeh program may be directed to a truly new design such as the Shafaq subsonic stealth fighter. The first Shafaq prototype was supposed to be ready by 2008—but the most that have been seen of the fighter since is a wooden mockup in 2014. In 2016, it was finally announced that a Shafaq prototype would soon begin testing.