Is It Time For America To Sell Tanks to Poland? 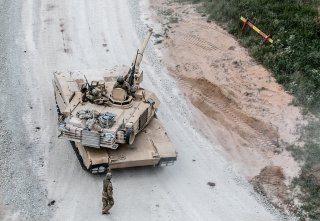 Here's What You Need To Remember: By purchasing M-1 Abrams, Polish industry could participate in co-production, sharing manufacturing technology and enhancing transatlantic cooperation.

Poland has become a major factor in NATO’s defense plans. Located along the Alliance’s eastern flank, close to Russia, Poland today and in the future will play the same role for NATO that West Germany did during the decades of deterring the Soviet Union. It is vital to the security and peace of Europe that the Polish military be as strong as possible. While Warsaw has done a great deal to replace its old Soviet-era equipment with modern, Western systems, it can and should do more. Likewise, the U.S. is already helping Poland, but it can and should do more. One step the two countries could take together would be to initiate a study to assess a potential foreign military sale of the M-1 Abrams tank to the Polish Army.

Since NATO’s decision to admit Poland (along with the Czech Republic and Hungary) in 1999, its importance as a bulwark of security for the West has grown. With Poland’s admission, NATO’s eastern frontier also moved hundreds of miles eastward. Poland is the largest country on NATO’s eastern border, providing strategic depth in the event of Russian aggression. Deployed in Poland, NATO forces will be able to respond not only to direct attacks on that country and those farther west, but to Russian aggression against the Baltic States and those bordering the Black Sea.  Poland also shares a border with former Soviet Republics Ukraine and Belarus, both targets of Moscow’s political destabilization efforts.

Poland’s role in NATO’s defense strategy is underscored by the U.S. decision to beef up its military presence in that country. For several years, The U.S. Army has been maintaining a rotational Armored Brigade Combat Team (ABCT) in Poland. In 2019, the two nations signed an agreement that would expand the U.S. military presence in Poland and create the infrastructure to support a full armored division plus critical enablers.

Warsaw has undertaken an impressive program to modernize its military and, in particular, replace Soviet-era platforms and equipment with modern Western capabilities. It has a fifteen-year plan to spend some $133 billion on new capabilities.

The United States is a major supplier of modern military hardware to Poland, to which it has sold F-16 fighters, Patriot air and missile defense batteries and the High Mobility Artillery Rocket System. Most recently, the two countries signed an agreement that will provide the Polish Air Force with 32 F-35 Joint Strike Fighters.

One important part of the Polish Armed Forces still needs to be modernized: its fleet of main battle tanks. In the last decade, the Polish Army managed to procure 250 used Leopard tanks, all of which require upgrades to a higher standard of performance. But the Leopard is no longer in production.

It is imperative that Poland finds a way to modernize its remaining tanks. But Warsaw’s choices are limited. The Leopard 2 is no longer in production. Germany and France are not permitting Poland’s participation in their development of a new main battle tank. As a result, Warsaw has been reduced to trying to modernize its aging Soviet-era tanks.

Luckily, there is an alternative. The U.S. could provide Poland with M-1 Abrams tanks. American Army Abrams tanks will now be operating in Poland continuously. An American ABCT with some 80 Abrams tanks is already pre-positioned in Poland. Poland’s purchase and operation of Abrams tanks will enhance interoperability with the U.S. Army similar to the role the purchase of F-35s will play for the Polish Air Force.

By purchasing M-1 Abrams, Polish industry could participate in co-production, sharing manufacturing technology and enhancing transatlantic cooperation. An M-1Pl could be modified in ways to suit the needs of the Polish Army with that country’s tank industrial base, providing any desirable design modifications for the Polish Abrams variant. Initial tank kits would be produced at the Army tank plant in Lima, Ohio, and shipped to Poland for assembly. A sale of Abrams to Poland would also help sustain jobs in the U.S. tank industrial base in states such as Ohio, Michigan, and Pennsylvania.

It just makes sense for Warsaw to look at the possibility of acquiring a variant of the M-1 Abrams. The growing Russian military threat makes it imperative that Poland finish modernizing its fleet of main battle tanks. In the absence of a viable alternative, the M-1 stands out as the best and only candidate. In addition to its benefit to the Polish Army, such a move would support the tank industrial bases in both countries.

President Trump should propose to the newly-re-elected President of Poland that the American and Polish armies evaluate a foreign military sale of the M-1 Abrams tank to Poland. Such an evaluation should look at both the military and industrial base value of such a sale.