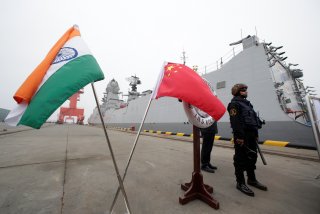 Here's What You Need to Remember: In an important sense, the issues now surrounding the confrontation on the Doklam Plateau are essentially the same as those that the two countries left unresolved in 1962.

In 1962, the world’s two most populous countries went to war against one another in a pair of remote, mountainous border regions. In less than a month, China dealt India a devastating defeat, driving Indian forces back on all fronts. Along with breaking hopes of political solidarity in the developing world, the war helped structure the politics of East and Southeast Asia for generations. Even today, as Indian and Chinese forces square off on the Doklam Plateau, the legacy of the 1962 war resonates in both countries.

While both the Chinese and Indian governments were relatively new (the People’s Republic of China was declared in Beijing in 1949, two years after India won its independence), the armed forces that would fight the war could not have been more different.

The Indian Army developed firmly in light of India’s imperial heritage. Large Indian formations had fought in several theaters of World War II, including North Africa and Burma. These forces would, in many ways, form the core of the new Indian military. The post-independence Indian armed forces were structured along lines broadly similar to that of India’s colonial antecedent, the United Kingdom, and in the early years operated mostly with Western equipment. This incarnation of the Indian Army saw its first action in 1947, in the first Kashmir War, fighting against its erstwhile associates in the Pakistani Army.

The war did not involve air or naval forces from either India or China. This worked in China’s favor; the Indian Navy was considerably superior to the People’s Liberation Army Navy at the time, and the Indian Air Force (equipped mostly with British and French fighters) had an advantage in modern equipment. Moreover, the PLA did not develop competence in combined air-ground operations for another generation. However, poor coordination on the Indian part, combined with the forbidding terrain, prevented the extensive use of combat aircraft. A disinterest in escalation meant that the navy would play no role in the conflict.

The fighting ended with a unilateral Chinese ceasefire on November 19. The PLA withdrew from the Indian territory that it had captured during the fighting, returning to positions that it had always maintained belonged to China. Many Indians, panicked by the defeat of forward elements in the mountains, expected a larger Chinese invasion. However, the PLA lacked the logistical capabilities necessary to sustain a large-scale advance, which would have required a considerably greater degree of mechanization. Moreover, Beijing had no apparent interest in administering a significant portion of Indian territory.