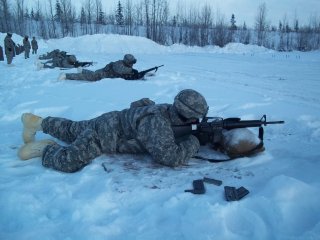 Here’s What You Need to Remember: Wilson’s intervention in the Russian Revolution was conceived with vague, limited goals that inevitably crept to encompass impossible ambitions. It was led astray working in cooperation with nominal allies that did not share the same objectives, fighting battles on behalf of local forces that were rapidly foundering.

Many have forgotten that more than thirteen thousand American soldiers battled the Bolsheviks in the Russian Civil War, and over four hundred would lay down their lives on the frozen Arctic and Siberian battlefields, in an ill-conceived attempt to tilt the outcome of that conflict.

The Russian winter also ravaged the Siberian Expedition. With the cold weather came Bolshevik counterattacks that began rolling the Czech Legion back one city at a time. However, Graves took remaining neutral seriously and resisted launching offensive operations against the Bolsheviks. When Communist miners went on strike in the Suchan Valley in 1919, he refused to crack down on them—until a local leader threatened attacks on U.S. troops.