Italy’s Stipa-Caproni Aircraft Is Real, Even Though It Looks like a Toy 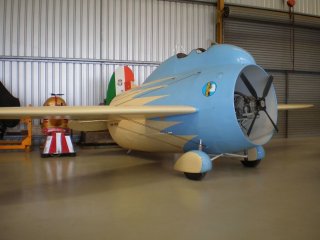 Here's What You Need to Remember: Buoyed by the Italian government funding of his project, and interest in his work from the Italian aeronautics community, Stipa patented his design in Italy, the United States, and Germany. His oddball design was even picked up and studied by the National Advisory Committee for Aeronautics, or NACA, the precursor to NASA.

After the Second World War, Stipa was convinced that the jet engine owed its development to his design and remained bitter about not receiving recognition. He also firmly believed that the German V-1 rocket engine from World War II was created in violation of his patented design, though the rocket used a radically different design that was powered by controlled explosions rather than a propeller. Some aeronautical historian do see similarities between Stipa’s tubed propeller design and turbofan engines, partially vindicating Stipa and his design.