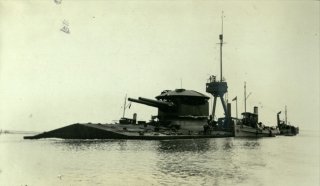 Here's What You Need to Remember: What the Faà di Bruno lacked in speed and maneuverability, however, was made up for in firepower. The Faà di Bruno bristled with two 40 millimeter antiaircraft guns, four 3-inch deck guns, and two enormous 15-inch guns.

The Faà di Bruno was an unusual floating gunboat or monitor, that was built in Italy during World War I and was intended for coastal defense or bombardment. Because the Faà di Bruno lacked a pointed bow, she was essentially a barge and had limited seagoing performance. Her propulsion system was a pair of steam engines that had been cannibalized from unfinished torpedo boats, giving the Faà di Bruno a very low speed of just under three miles per hour.

Navigation was conducted from a lightly armored bridge that sat on a tripod mast and also doubled as a lookout tower. From here, the barge’s officers issued orders to the crew — a total complement of 45 men.

What the Faà di Bruno lacked in speed and maneuverability, however, was made up for in firepower. The Faà di Bruno bristled with two 40 millimeter antiaircraft guns, four 3-inch deck guns, and two enormous 15-inch guns.

The projectile they fired was similarly massive — nearly 2,000 pounds of armor-piercing or high-explosive that was intended to send enemy battleships to the bottom of the ocean and could be fired out to over 12 miles.

The guns were mounted side-by-side in a turret on the center of the deck. The turret was covered by over four inches of steel plating, and the deck was likewise covered in an inch and a half of steel armor, which provided a limited amount of protection to the lumbering, but heavily armed monitor.

Faà di Bruno was laid down during World War I, and participated in only one naval action, an infantry support bombardment of Austro-Hungarian positions during the Eleventh Battle of the Isonzo in 1917. A storm later that year drove the Faà di Bruno ashore, where she remained for nearly a year, before being hauled off and refitted, though she was stricken from the Italian Navy’s list in 1924.

At the beginning of World War II, the Faà di Bruno was recalled into service and reactivated to guard Genoa in Italy’s northwest near the French border. During a Royal Navy bombardment, her electrical system was damaged, severely hindering deck operations.

Because of the massive size of the 15-inch shells, they required mechanical assistance to be pushed into the gun’s breech, and could not be loaded by hand. The Faà di Bruno fired only three shots at the British before firing was stopped due to the damage her mechanical loader sustained.